In a September 2007 show that he had in at the Solomon Dubnick Gallery in Sacramento, John Tarahteeff wrote of the show, “I chose to title my show “Picturemaking” as this term emphasizes the compositional construction of a painting over its literal meaning. Though I recognize the allegorical potential of the imagery in my paintings and the recurrence of motifs, I don’t paint a body of work around a particular literal theme. I try not to have ideas to illustrate or to interpret in any way the imagery that evolves from my sketches into finished paintings. The prospect of suggesting a story through imagery is less important to me than the sheer act of playing with the formal elements of a picture (shape, color, texture, etc.) in the context of representational painting. Underlying my process is a faith in the formal language that has developed within the rich tradition of painting. The form of a work can give credibility to the absurd concoctions of the subconscious and breathe new life into the interpretation of stale subject matter.

I try to employ a variety of conventions to create an architecture within the image that suggests more than a snapshot of reality. This architecture reveals itself through formal relationships in the work, such as how a shape or passage of color is repeated or line is used to direct the viewer’s gaze. I use pictorial devices to figure out how to get from one place in a painting to another and consider how the surfaces in the work change the effect of that journey. Sometimes a very balanced distribution of color over the whole of a work is used to mediate the discrepancies in the styles of the parts. As I obsess over the peculiar compositional mechanics of a picture, it becomes a contraption which engages me more by the odd resolution of its design than by the self revelations it might produce.
This show includes over 20 painted/created during the past four years. As with my previous work, these paintings are the result of a purging of my subconscious that begins with a daily routine of sketching mostly from my imagination. I often attempt to sketch figures in poses or groupings which set up an illusion of sculptural space that fits tightly in the confines of the picture frame. Over time I revisit past sketches cutting and pasting imagery in a way that defines the space of the picture rather than merely occupying it. By interconnecting figures and elements of their setting I hope to bring a sense of inevitability or intent to their placement in the picture. When I arrive at a sketch that seems balanced and interests me in a manner that I can’t take it any further as a sketch, I begin painting. Sometimes I will only hold on to a single figure from a sketch over the course of the painting totally reworking the imagery because of the change of scale and formal parameters like color and texture that painting affords.
The paintings in this show vary in their degree of realism. Though the pictures often stretch how things really appear and sometimes juxtapose seemingly disparate objects, the worlds they represent usually obey the same physical laws of our own. I continue to use texture as a way to explore the gap between the illusory image of a painting and its reality as a physical object. I am intrigued by the dialectic of texture simultaneously heightening the three dimensionality of the illusion while reaffirming the painting as a relatively flat decorative object.

One painting, which was sold from that show, was titled, Shark Fishing. 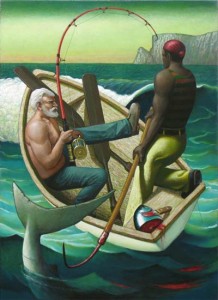 Acrylic on canvas, the usual medium for Tarahteeff, it is 46 inches high x 34 inches wide and is now in a private collection.

The piece contains a number of recurring themes that are found in Tarahteeff’s work.  Water is a common element.  Fishing and fish as well as hooks are powerful symbols.  Note the fish head from which bait has been cut.  One man holds a gaff hook while the other struggles with the fishing rod which, under great strain, is bent in to the shape of a hook.  The strain on the rod tells us that the shark is big and we see the tail of the shark emerging from under the boat.  The tail is most similar to that of a Great White.  They need a bigger boat.

Characters are often dressed (or undressed) in relationship to water and swimming or working around water.  Compare Shark Fishing with The Lure.

In The Lure, we have a repeat of certain elements … ocean, fishing line, hook.  This time the bait is somewhat different.  This work, from 2004, is 20 inches x 12 inches.

The same subject was visited previously, and also became a part of someone’s collection. 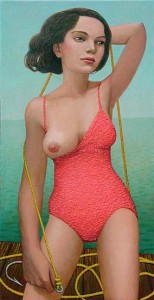 In this earlier version, the facial expression seems somehow more sad.  It is as though she would prefer to not be a part of the process.  That preference seems also to be reflected in the choice of color for the bathing suit.