A drawing is being offered for sale in the Sacramento area.

I have had a fair amount of time to look at this work.  At first glance, it has the appearance of part of a torso. (One imagines a chin, neck and shoulders.)  The overall surface is not, however, suggestive of flesh and bones.  There is a liquid feeling to it.  Rounded areas are highlighted as if there was light shining off a wet 3-dimensional surface.  Taking a clue from the title, it is possible to imagine paint with mixed hues and chromas being poured on to a surface.  By rendering the subject in shades of gray, the artist can examine the play of light on shiny, rounded surfaces of different saturation without reference to hue.  If you have any interest in this item, call me at 916 383 5341.  I will put you in touch with the current owner.

As with all artists in our collection, I invite those who have collected works by specific artist to share pictures of those pieces, and as much detail such as title and dimensions with which you are comfortable.    If for no other reason, putting images of collected works out on the Internet makes them accessible to art students who want to know what it is that collectors care about.  Many artists’ work seems to become invisible once they move out of the area in which they have sold their art, move on to other interests, or, sadly grow old, stop painting and/or die.  If collected art is to have any real meaning, the images of it must transcend the time in which it is created and sold.  I welcome any images sent to me for purposes of being included in these pages.  Call me at (916) 383-5341.  (We answer with a business name (grauhall.com), but it is still us.

In addition to the example in the Edwards/Pedersen Collection, there are the following selected works by Ken Waterstreet: From 2001, this painting is titled Amber As Muse. 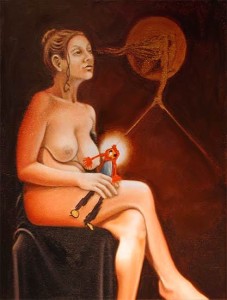 It is oil on canvas and measures 10″ x 12″.   Note that she, too, is holding a fingerpaint character.  The glow surrounding its head may signify holiness. A larger oil on canvas is titled Vibratory Disturbance. 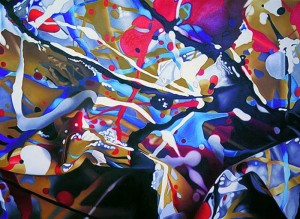 It imeasures 40″ x 54″ and is also from 2001.  Very much an abstract work, there is a feeling here of liquidity and splashing. In Classics XVII, a 48″ x 60″ oil on canvas from 1988, we see a depiction of some classic items of decorated pottery that might be found in a museum. 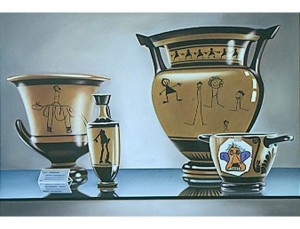 They have been adorned with child-like motifs. In the following year, Waterstreet quoted from a number of classic paintings and one or two more modern ones in Classics XVII, a 36″ x 24″ oil on canvas 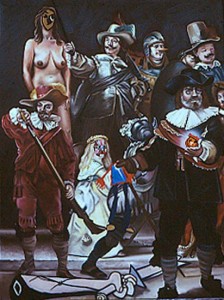 Present also in this are a finger-paint character, with the holiness-lit head separated from the body, and a modern nude with her face de-faced. In Creation of Eve, a colored pencil effort from 1992, we find a certain well-known deity creating Eve in full frontal nudity.

At 6″ x 13″, the piece might have been difficult to notice on the ceiling of the Cistine Chapel. The Three Graces seem not at all to mind the fingerpaint fellows in this 60″ x 40″ oil on canvas from 2004. 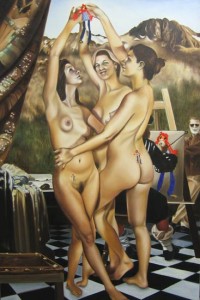 The artist at the easel, in some-other-century garb, is depicting one of the frivolous fingerpaint figures on his canvas, while the actual artist looks on through sunglasses in a self-portrait.  The tattoos on the Muses may be of a similar frivolity, though not of fingerpaint. Going back to the theme of liquids is this 2003 canvas titled Bettes Special (or Food is Love). 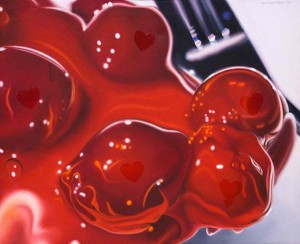 This 24″ x 30″ oil not only has a strong image of liquidness, but also looks quite delicious. A series of flower paintings has been made.   Here some azaleas are represented. 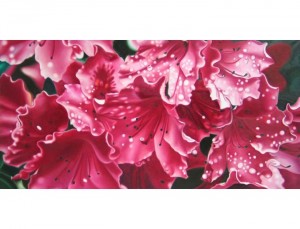 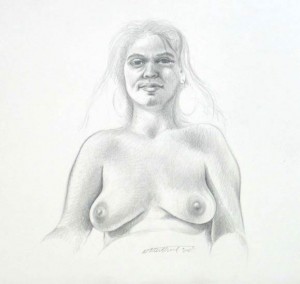 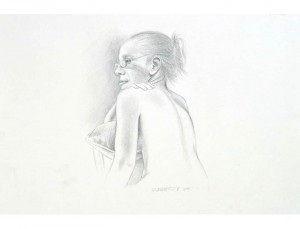 Finally, a fingerpaint figure has escaped and is haunting the Crocker Art Museum in this 2005 Alkide Photo.

The piece is 19″ x 11½” and is titled The Ghost of Crocker Past. Ken exhibits a mastery in creating images of water.  The earliest work of which I am aware is this from 2002 titled Revenge of the Brook Trout. 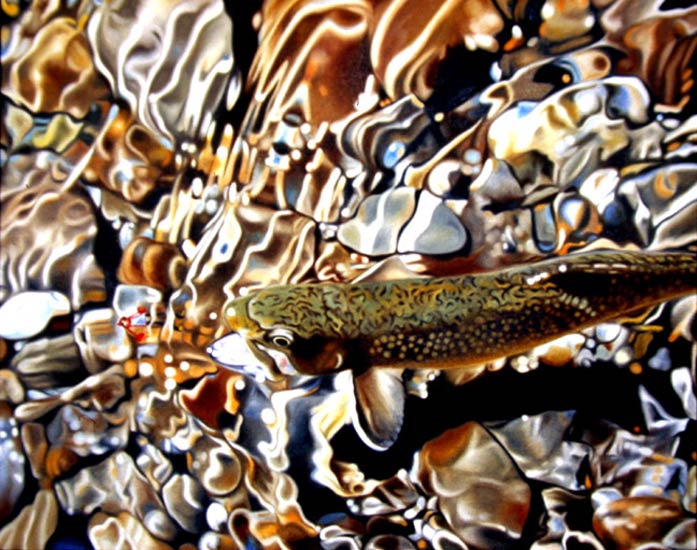 It appears that he is about to make a tasty meal out of one of those finger-painted characters.  The representation of the stones seems to convey the liquidity. Two years later, this depiction of the Middle Fork of the Cosumnes River was done. 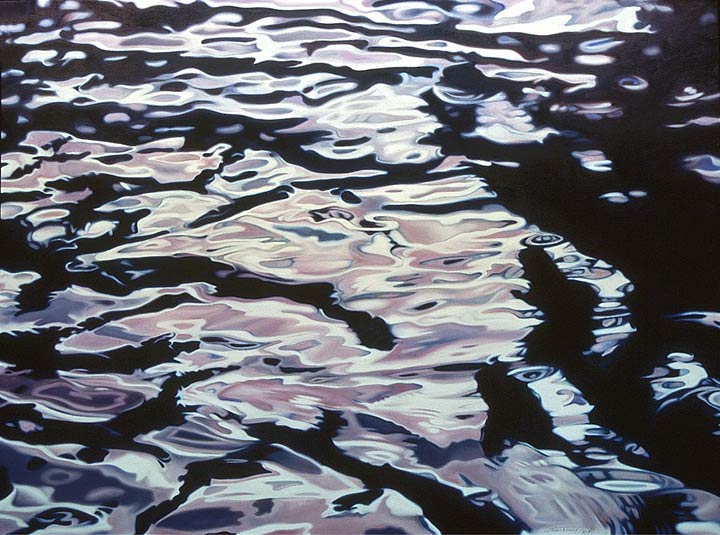 In the same year he made two studies of Yosemite Creek. 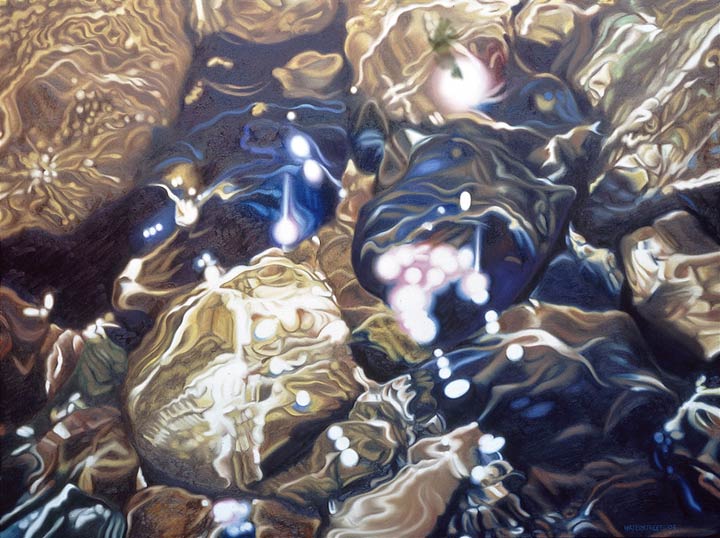 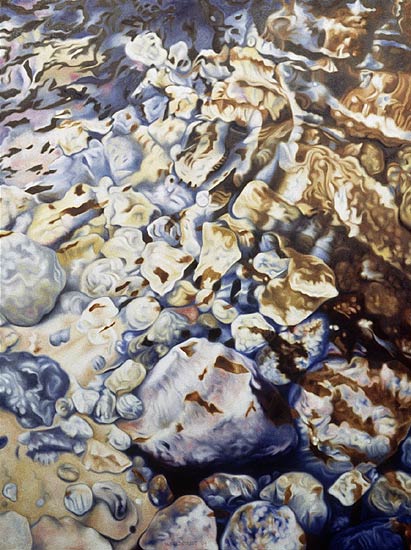 In the Middle Fork work, the water is made evident with reflections of light from the sky in irregular patterns as air currents disturb the surface.  The angle is oblique and possibly reflecting light from the north making it bluer and colder.  In the first Yosemite Creek, The sun is being reflected and we see past the surface.  River rocks, rounded by endless tumbling and covered with algae lie just below the surface atop other rocks.  There are deep, dark spaces amidst the piles of rock.  In Yosemite Creek II, some of the rocks are bleached out.  Perhaps their algal coverings had been exposed to the sun during periods of low water.  One looks closely for faces. This oil on canvas is of  Lavezzola Creek  near Downieville, California was painted in 2005. 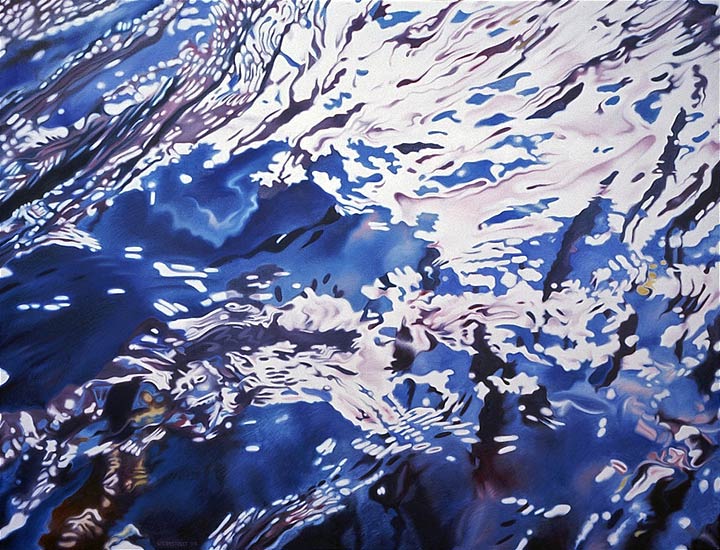 The water is deep.  The reflections from the sky do not show the sun directly. Lavezzola Creek is popular with white-water kayakers.  A video of one such adventure may be found here: http://www.youtube.com/watch?v=V9ocQawaYZs   Hundreds of reflections of the sun may be seen in this painting of the West Fork of Carson Creek from 2005. 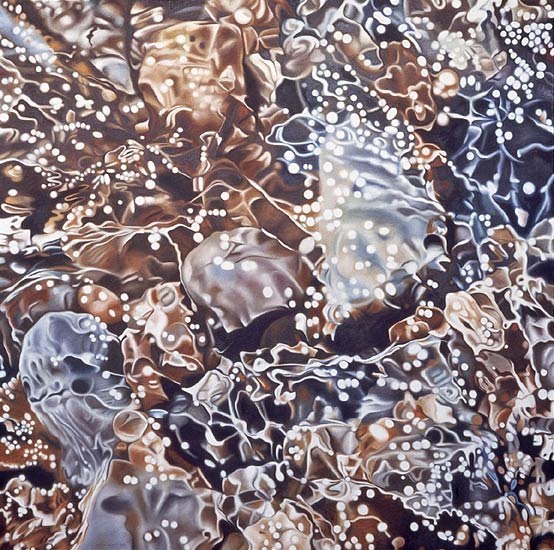 A year later this watercolor was done of the Gualala River. 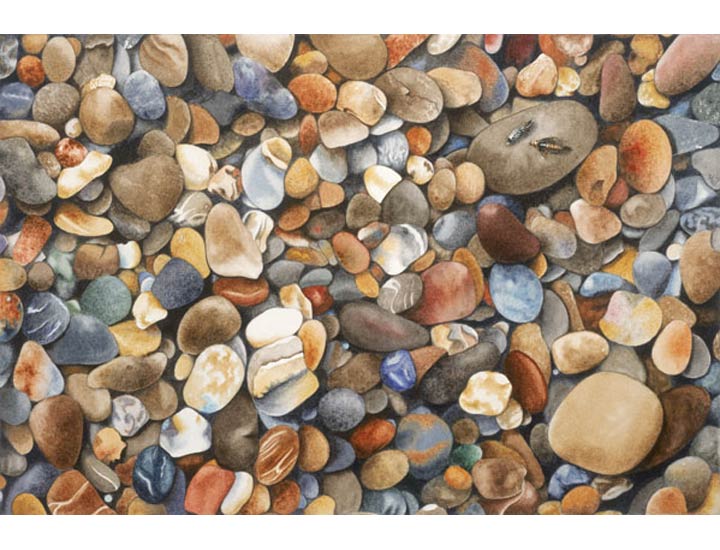 In 2007, Ken completed this oil of the Little Truckee River. 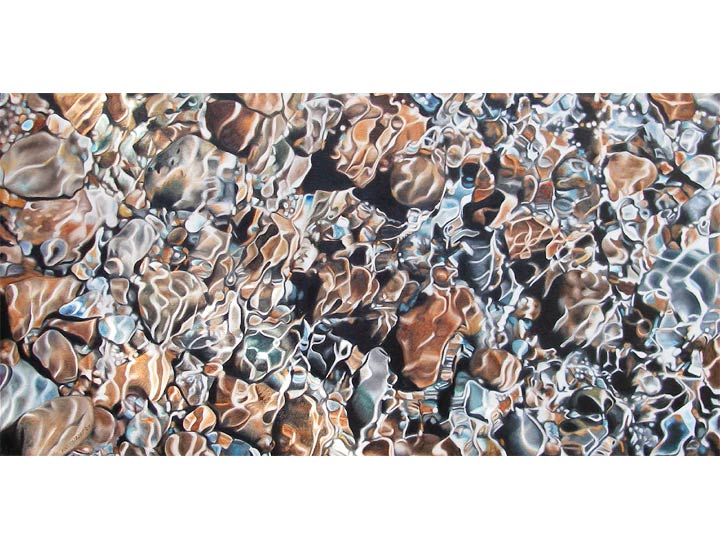 Two oil on canvas from 2010 are Feeder Stream, 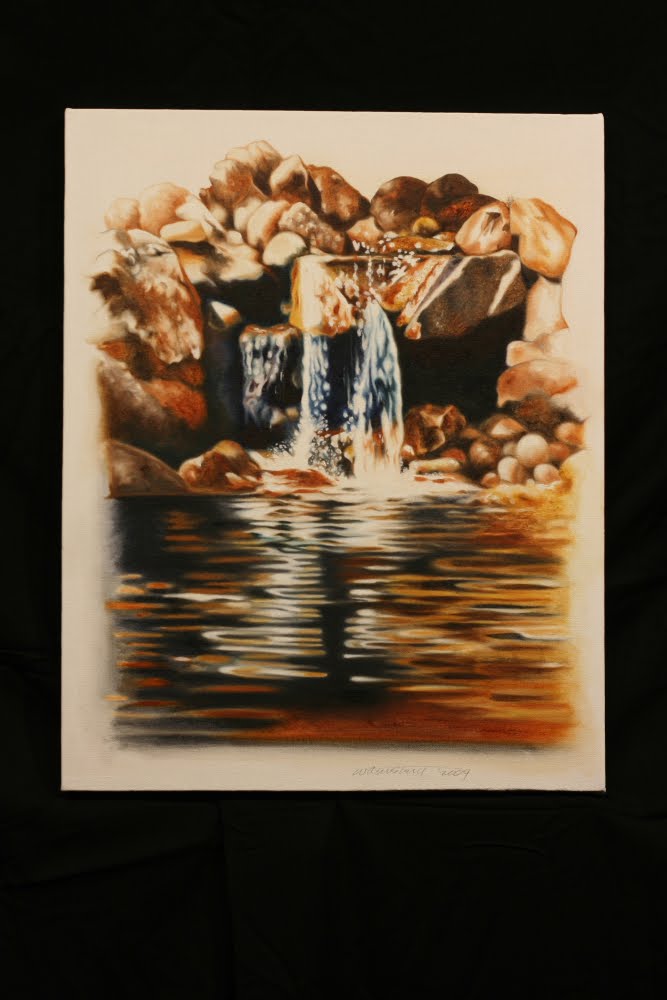 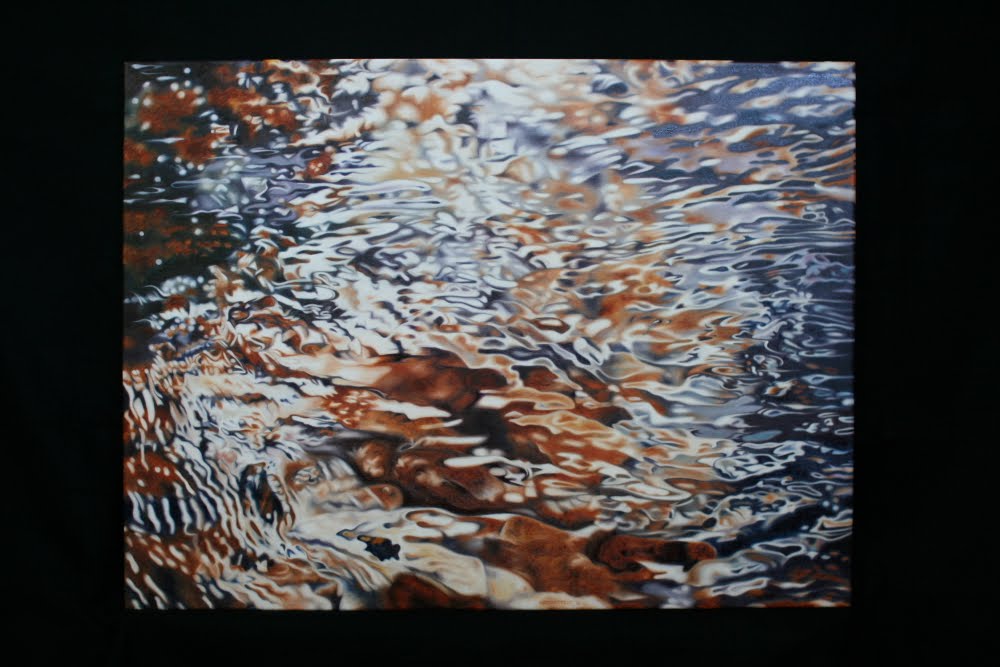 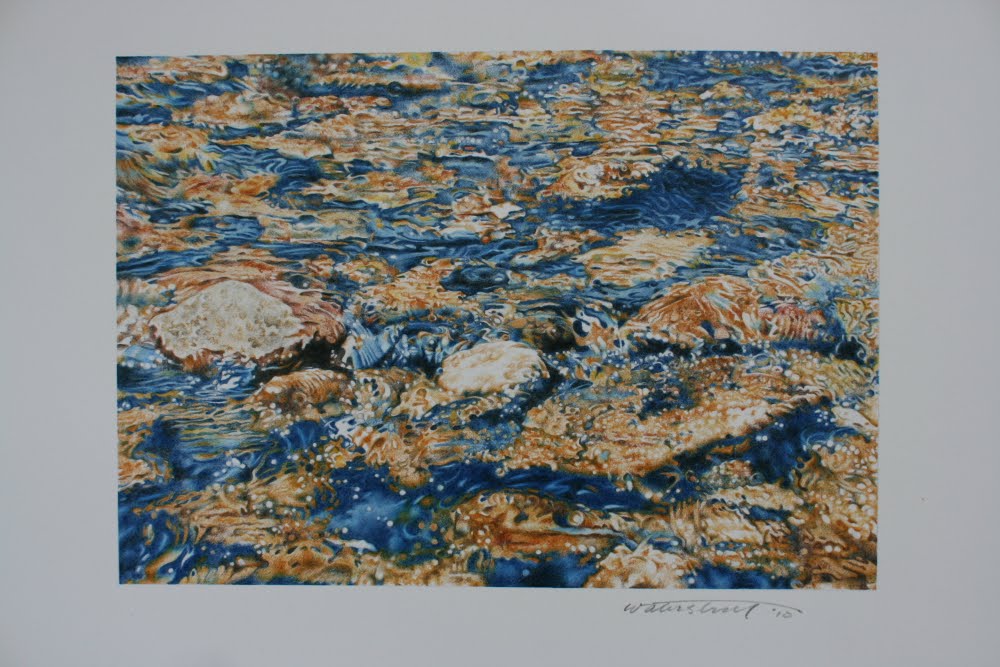 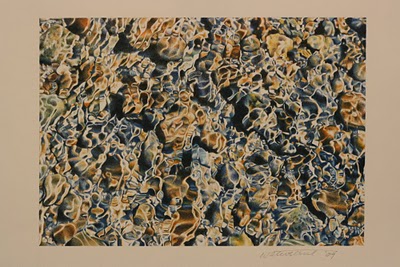