Mick Sheldon states, in his introduction to his website (http://www.micksheldon.com/), “In 1992, I was standing in the Los Angeles County Museum of Modern Art during the “Degenerate Art” show (works designated by Adolph Hitler as degenerate,) looking at the prints of Beckmann, Nolde, Kirchener and others, looking especially hard at Karl Schimdt-Rotluff’s “Kristus Kopf” (or “Head of Christ” as it’s known in English,) and I decided then and there that I wanted to work in this medium.

Since that time I have carved and printed over two hundred and fifty different wood, linoleum and plastic block prints. Even though I’ve worked with all of the traditional media and made a number of multiple color block prints, I primarliy make hand-colored woodblock prints from birch ply, rag paper, oil-based ink, and watercolors.”

Here, I present as many examples of Mick’s work for which I can find images.  Collectors of his work are encouraged to contact me regarding images of his works not shown her, so that such gaps may be ameliorated.

First, may I present a form of netsuke that Sheldon calls, “Micksuke”.

Those of you who know Mick will recognize the likeness.

We may also see him in his works.  Here he is presented at the Blue Rabbit. 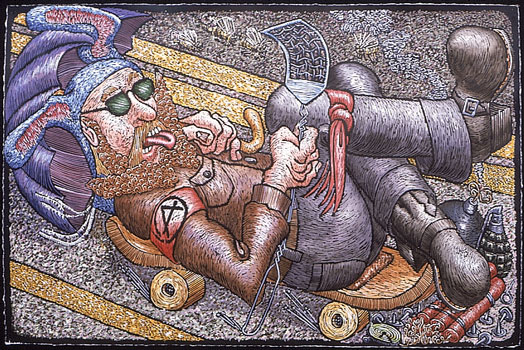 This piece is titled Blue Rabbit Street Luge Headed For Trouble and Trying To Stop.  It is 32″x48″ done in 2002.

The theme continues in Self Portrait As The Blue Rabbit Poking The Devil With A Stick, 36″x24″ done in 2002; 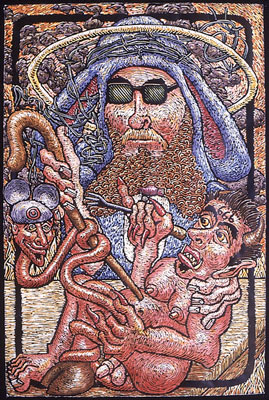 and in Self Portrait as the Blue Rabbit Making Shadow Alligators while Standing in a Barrel of Gasoline.  It is 36″x24″ done in 2002. 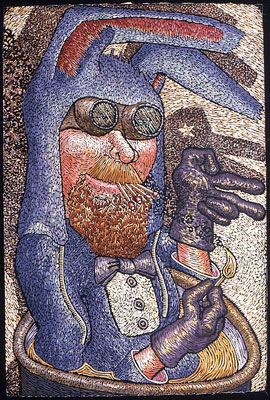 In this piece, Mick is seen with his beloved standard poodle trying to destroy one of the evil computer things that suck out our brains and keep us from spending time making art. 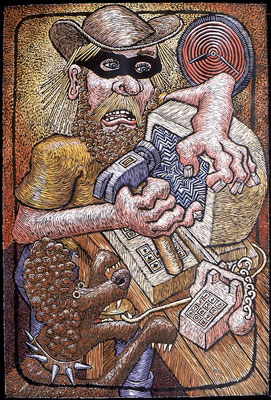 His poodle was murdered by a Chinese business man who, in an attempt to make more money by cheating on the composition of an additive to be used in dog food, poisoned many pets with melamine, a chemical that helps to fake certain test results. 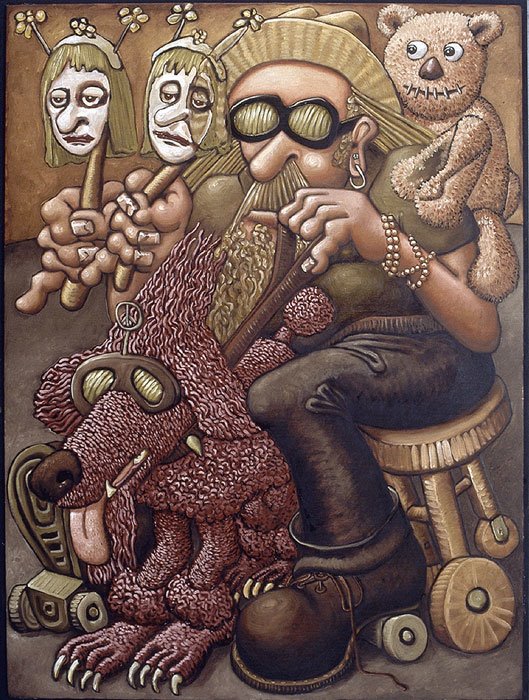 This one was in a show at the Blue Line Gallery in Roseville, California.

Roy Deforest once called me a painter of monsters but that my monsters are people. His monsters are dogs. He was right about mine of course but now these monsters rather than just being painted are drawn, carved, printed and then painted. For the past two hundred and forty some odd wood blocks the subject matter of my work has been a mix of myth and religion with subjects going from the virtues and vices, the saints and sinners and the second coming to many other figurative and still-life works all the way through to some big fun in the suburbs. The newest artworks that you see here (on his website) are from my current group of images that have to do with my real and imagined life as a blue rabbit. When you live in the world of the white middle class suburban culture which is the only culture never discussed, you must rely on your own personal histories in order to make a difference or just to make people take a look at the work. I was raised on my father’s local television kiddy show back when T.V. was live and video wasn’t even thought up yet. It was Nevada in the fifties and sixties. He was a ventriloquist with a yellow monkey and my mother made me dress as a blue rabbit to serve dutifully in the passing out of Graham Crackers and chocolate milk to the other children on his show. Once in a while I would surprise everyone by spelling the word Chrysanthemum when no one else could. This is my culture and I own it as I remember it for real and for keeps. The pictures here are about my own dramas some truth and some lies filled with humor just to access your sense of the curious and the ridiculous. No big concepts. I made them for me. I made them for you.

In a transistion from the Blue Rabbit cosplay to being a “regular guy, we have this; 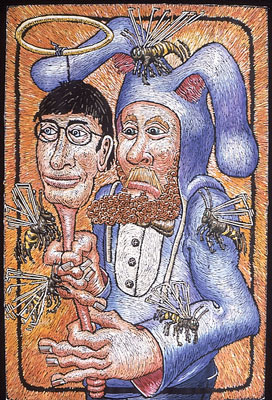 Some earlier works dealt with more-or-less religious thems.  From 1992, there is this diptych The Battle Between Carnival and Lent. 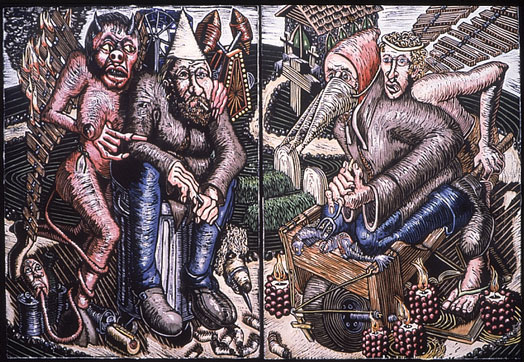 From 1996 there is The Four Horsemen of the Apocalypse, also a diptych. 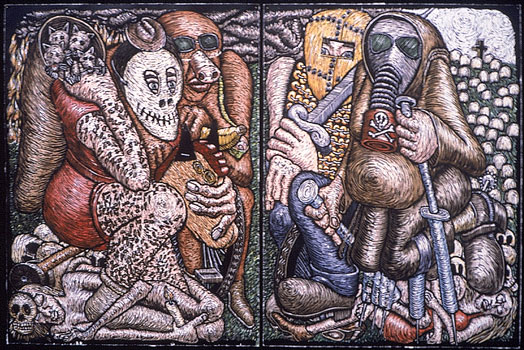 In 1997, Sheldon made Self Portrait as St Joseph the Carpenter Creating the First Archetype. 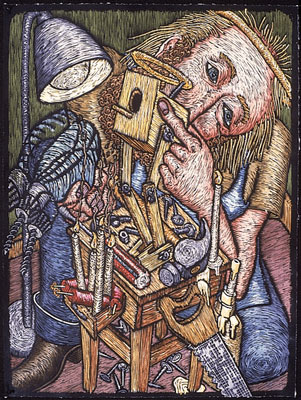 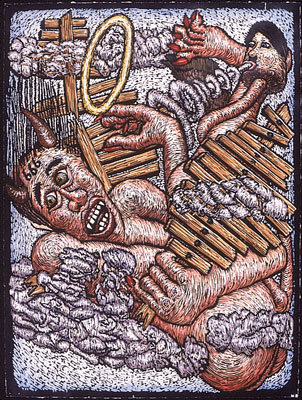 and St Francis Preaches to the Birds While Feeding Them 1998. 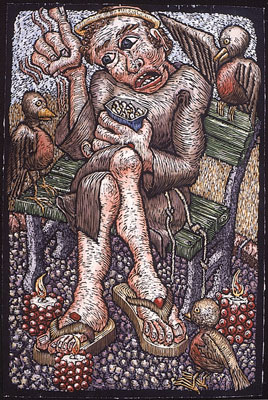 Five works from 1999 include The Veil of Veronica Surprise from The Second Coming 1999; 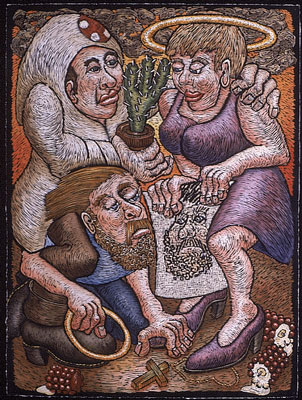 Waiting for the Parade _ Ready with the Rocks and Bottles, a diptych; 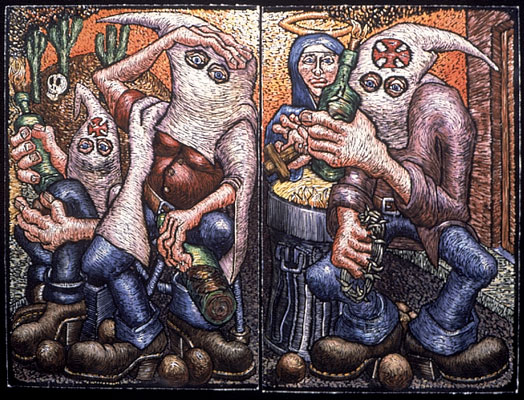 The Mocking of Christ from The Second Coming; 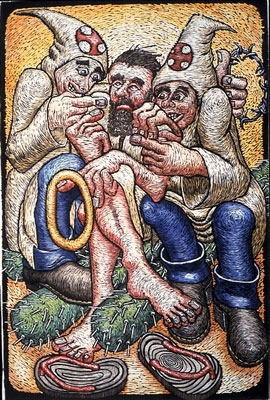 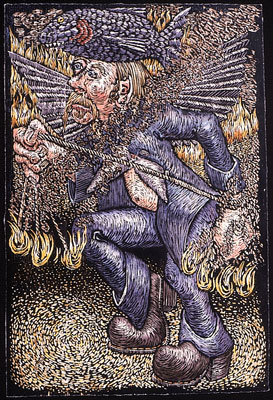 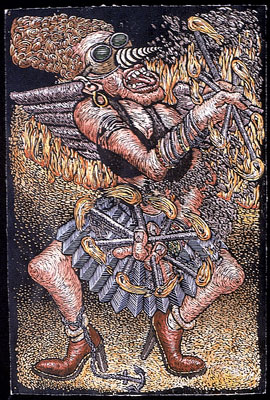 Four works from 2001 begin with a continuation of a religious theme in Amidst The Noxious Stenches Of Hell St. Wolfgang Forces The Devil To Hold His Prayer Book. 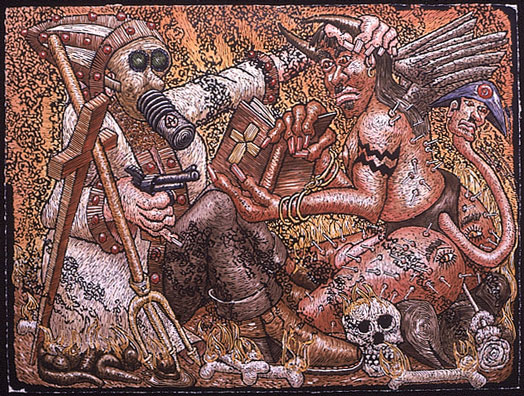 Then, he moves into more suburban themes with Meat Prep _ Wild with Sauce; 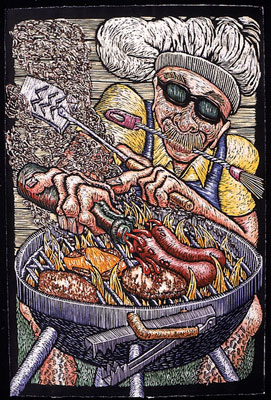 Stick_up at the Lemonade Stand; 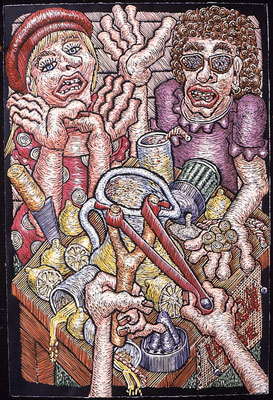 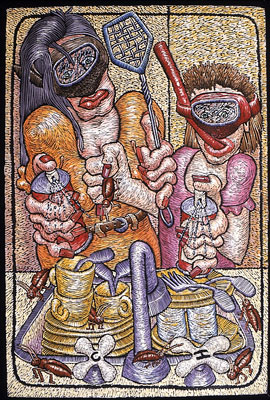 In 2002, the suburban them continues with Citrus Heights Backyard Laocoon. 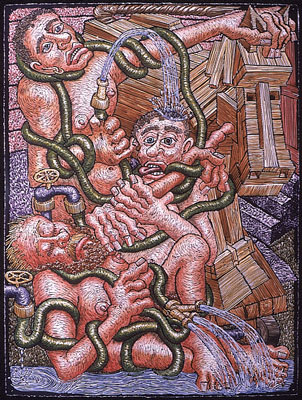 Additional, more recent works include Cooling Feet in the Spring Snow While the Ear_Nose_Elbow Boat Goes Over the Falls; 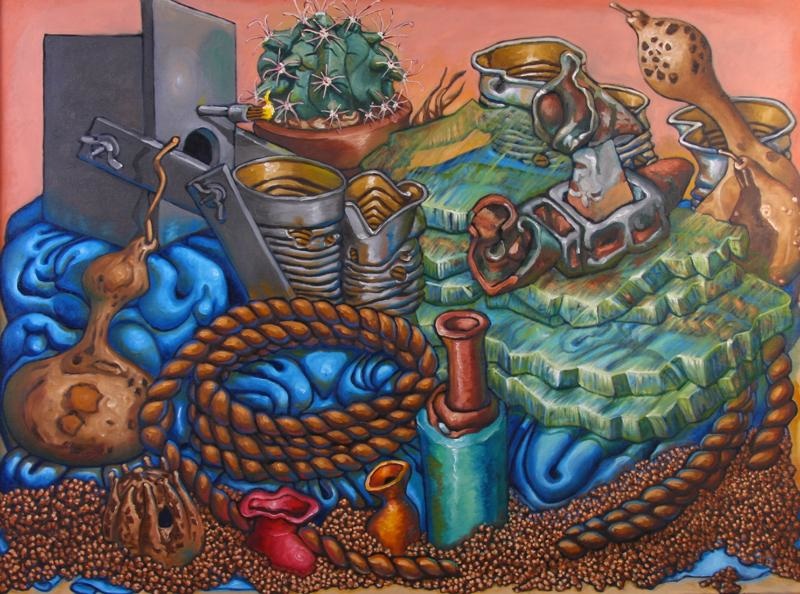 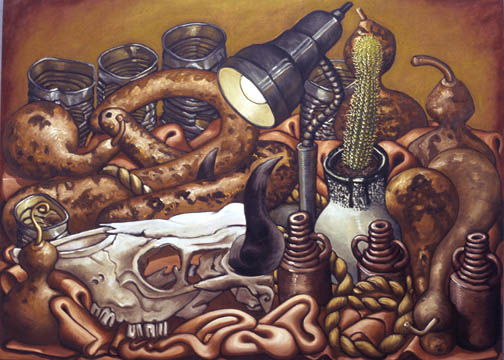 and Violence and Desire. 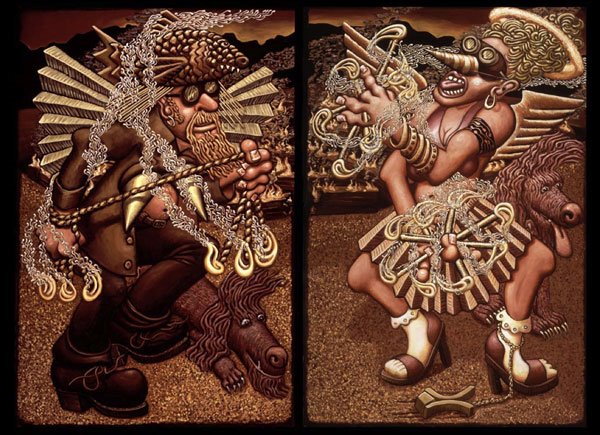 Mick has recently offered up some writing that he has produced on the subject of Art, in particular (I believe), Art in Sacramento.  I will be presenting those musings on a separate forum.