These pages attempt to catalog the oeuvre of the brilliant artist Raymond Rowley King, arranged in alphabetical order by title.  They are ranged over five pages to make them easier to load quickly.  On this page are items J through N.   As additional works are submitted to me, I will add them as time permits.   A reasonably good image is required for publication.  If the collector wants to have the owner’s name mentioned, please include that information.  At present, I have images of just over 100 of the works of Raymond Rowley King.  Some times his name is spelled Raymond Rouley King incorrectly.  Whenever possible, i prefer to include the title of the work as well as the dimensions .. and whether or not the work is being offered for sale, and, if so, please suggest a  price.  In that regard, the location of the artwork is an important factor.  At present, emails may be sent to alan6401@hotmail.com . You may also text me at (916)383-5341. 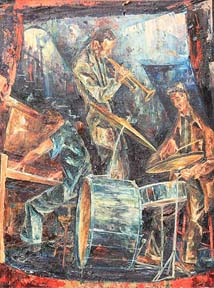 Sold at auction in January of 2012 in Brentwood, California is an oil painting of some jazz musicians. I have temporarily labelled it Jazz Combo. The signature is done in a style that is characteristic of his, however, he signed only “Rowley King”. It is possible that this was painted in an earlier time, prior to his incarceration. Raymond was a jazz musician. He was an accomplished artist by the time he was locked up in Vacaville Medical Facility. He had to have created some works to get that good. The work measures 48 inches in width by 55 inches tall.

Jennie In A Blanket 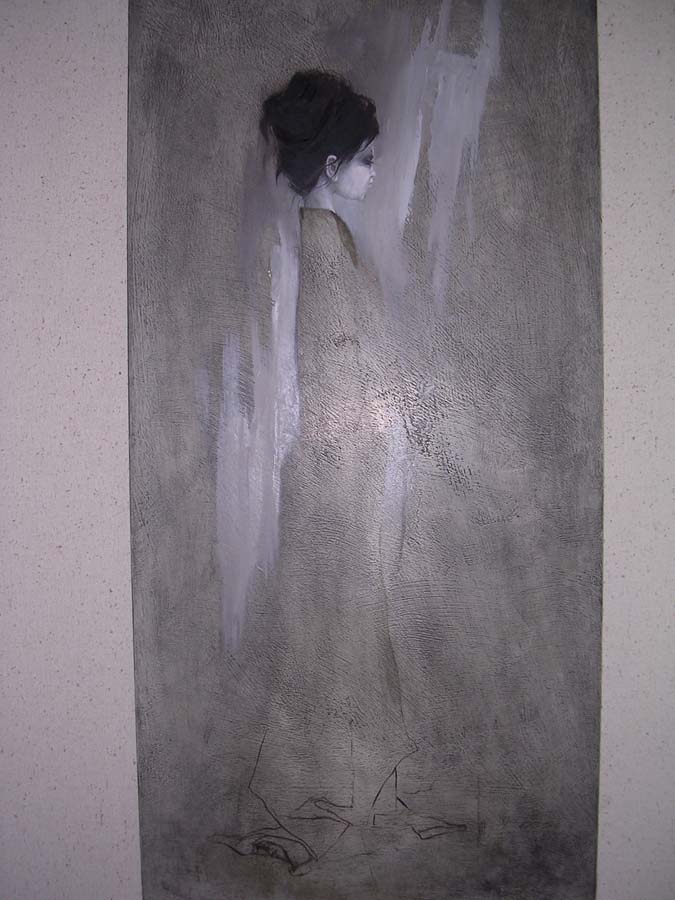 The size and medium for this painting are unknown to me as yet, however, from the pallette knife marks on the surface, I am guessing that it was painted on tempered Masonite. It would have been painted in the mid 1960s.  This work is believed to be in a private collection in Northern California. 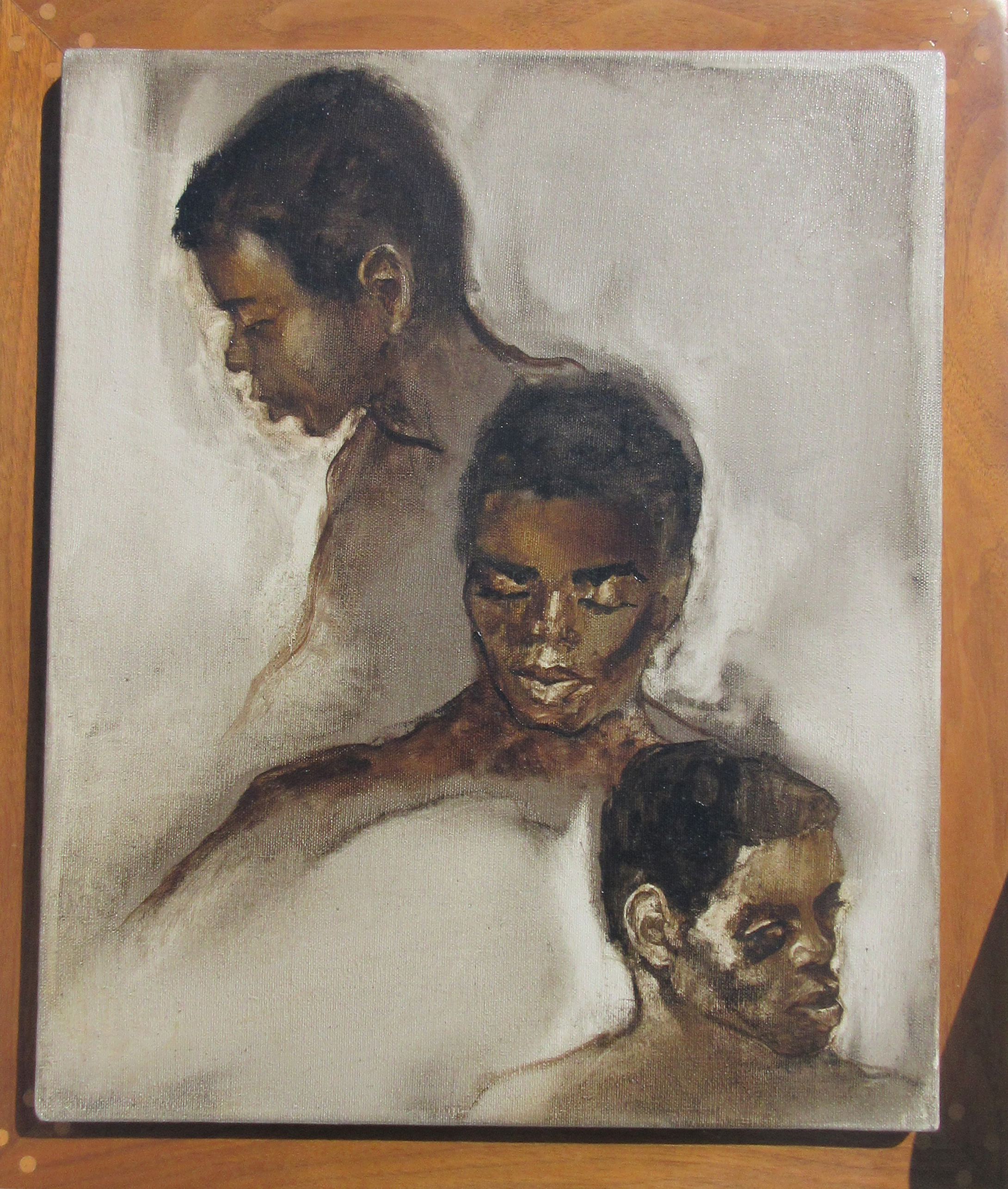 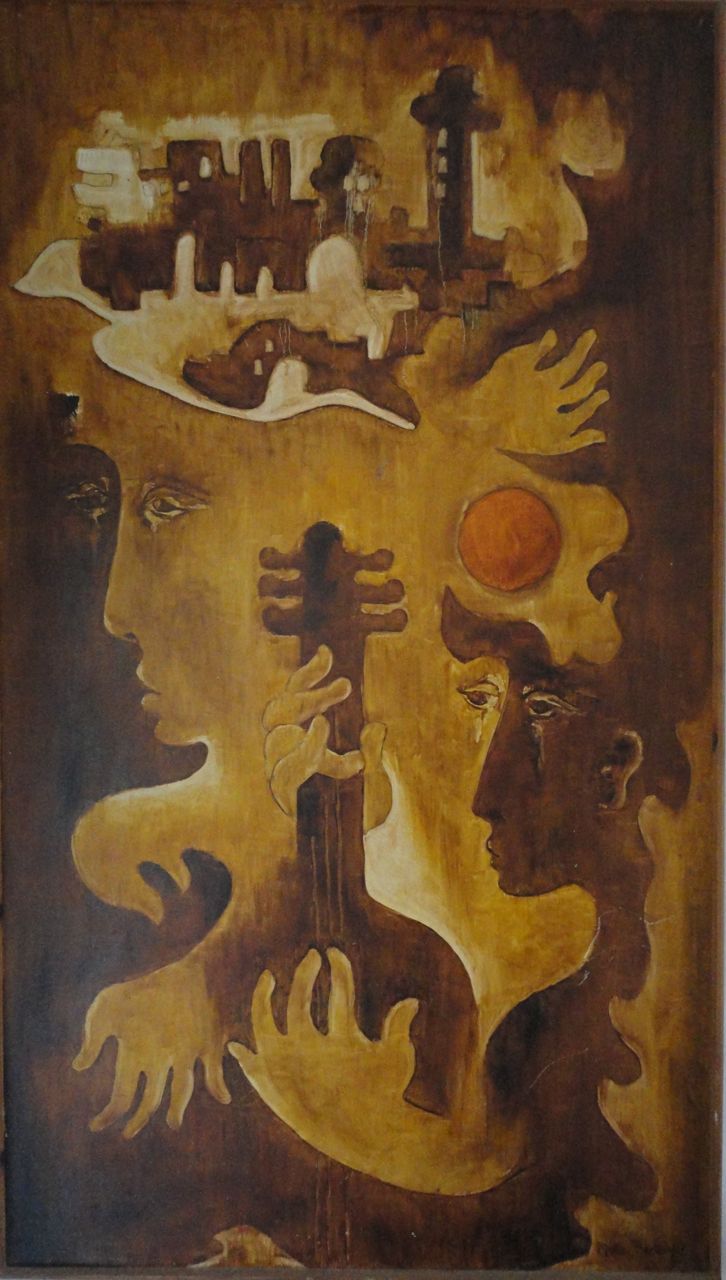 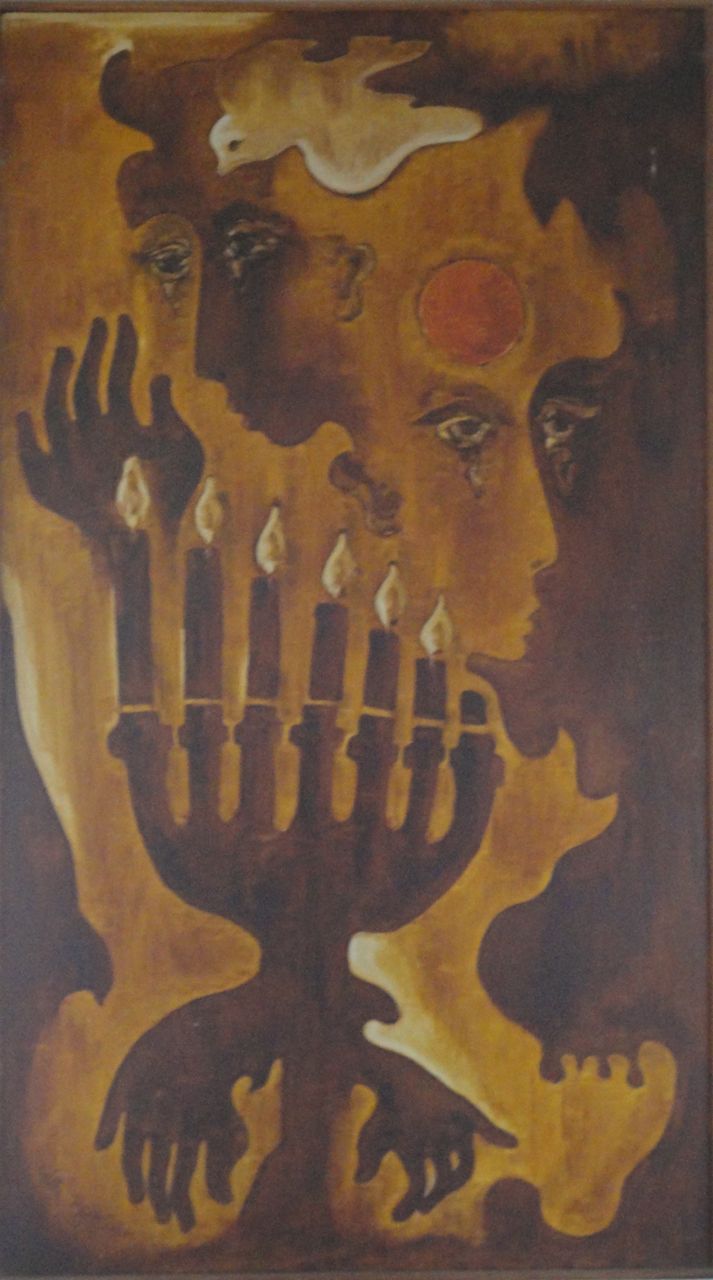 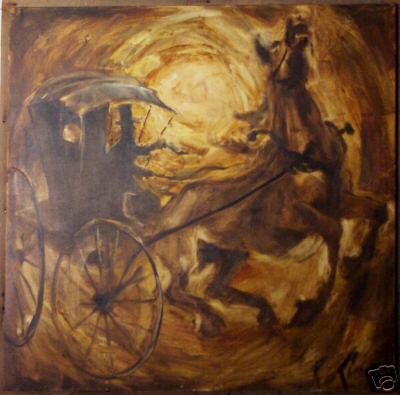 Lea, a Friend of Ours 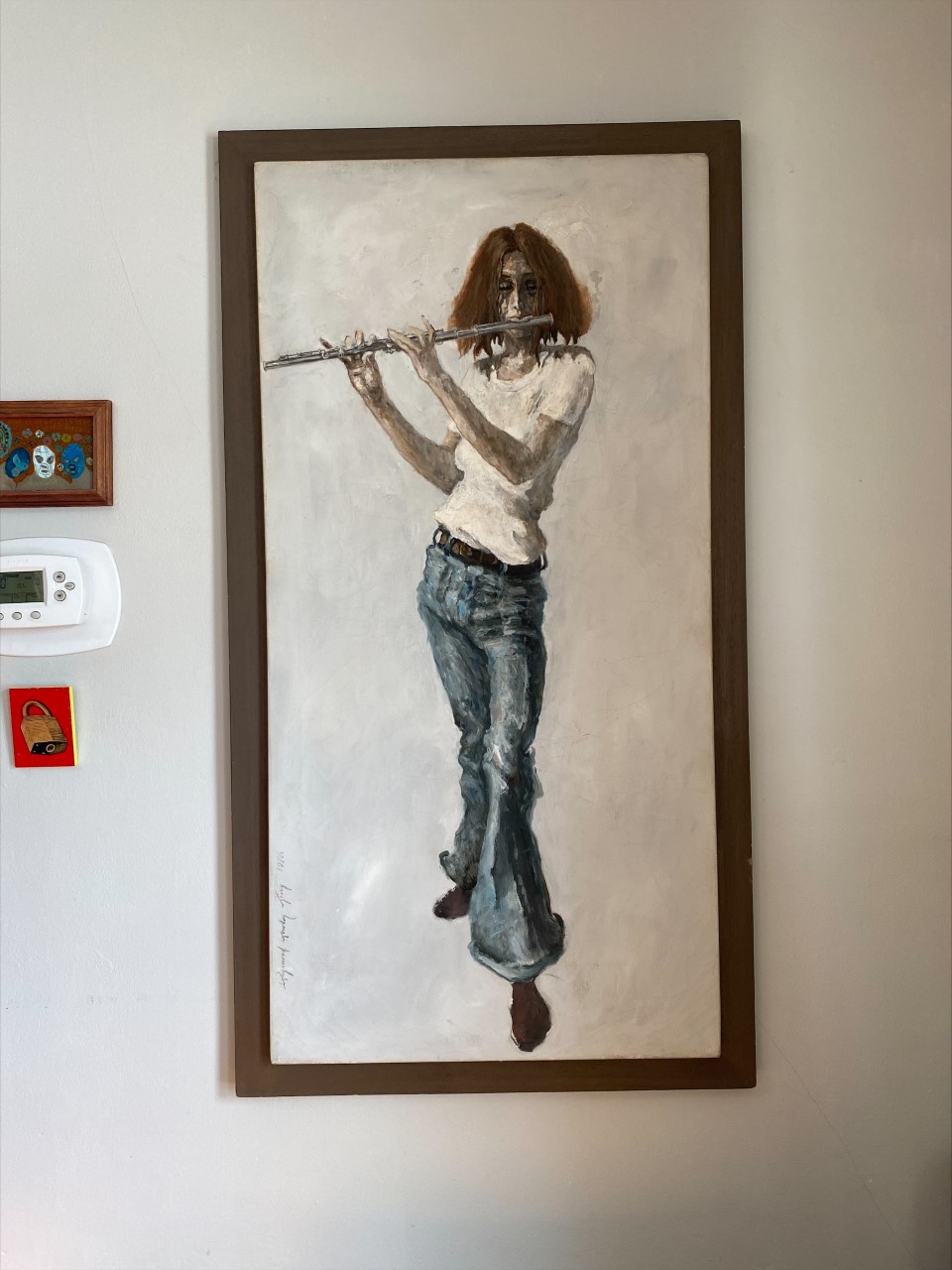 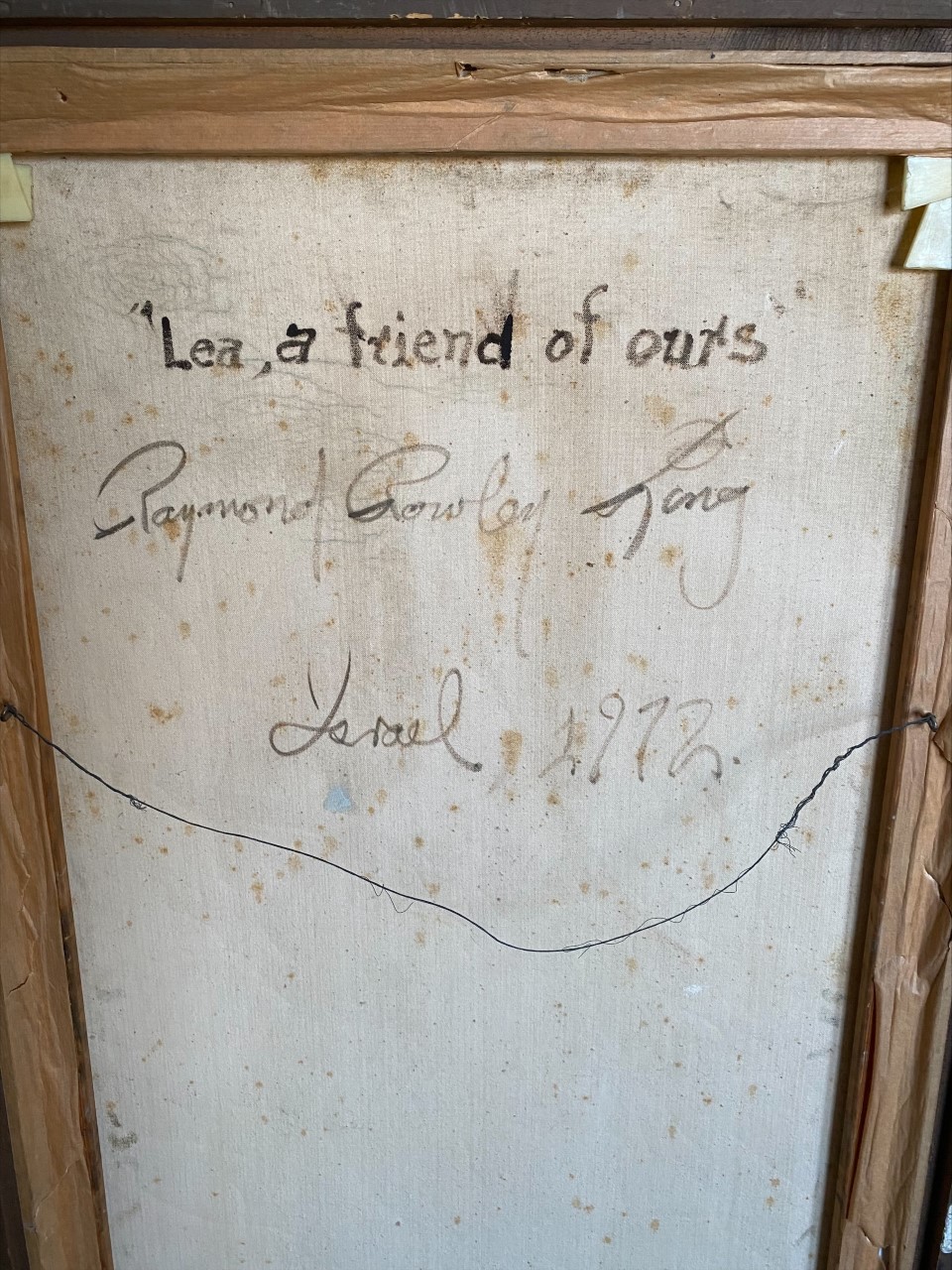 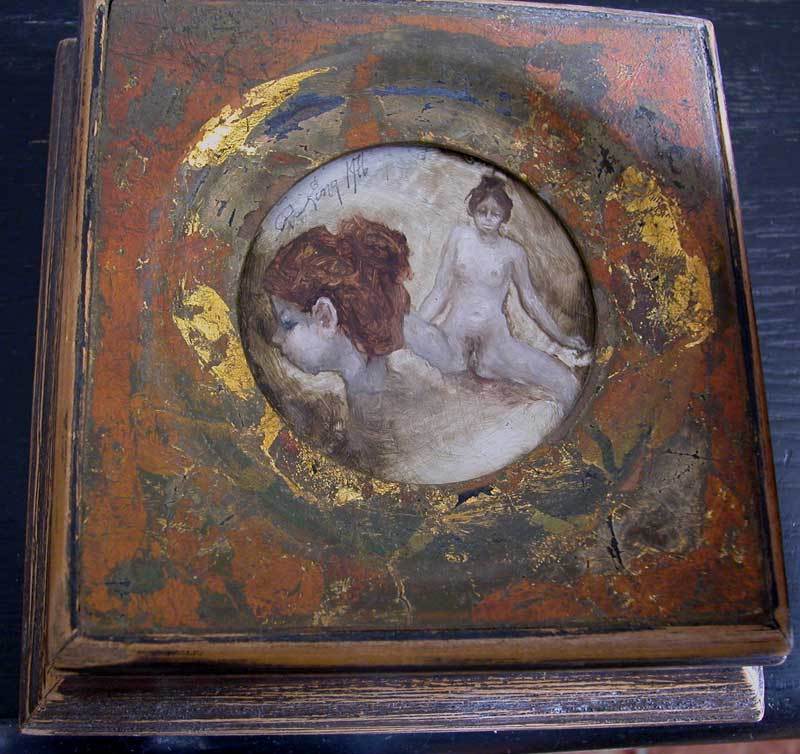 The unusual frame makes it seem, at first glance, to be the cover of an old book.  The signature at the top of the circle indicates that it was painted in 1976. 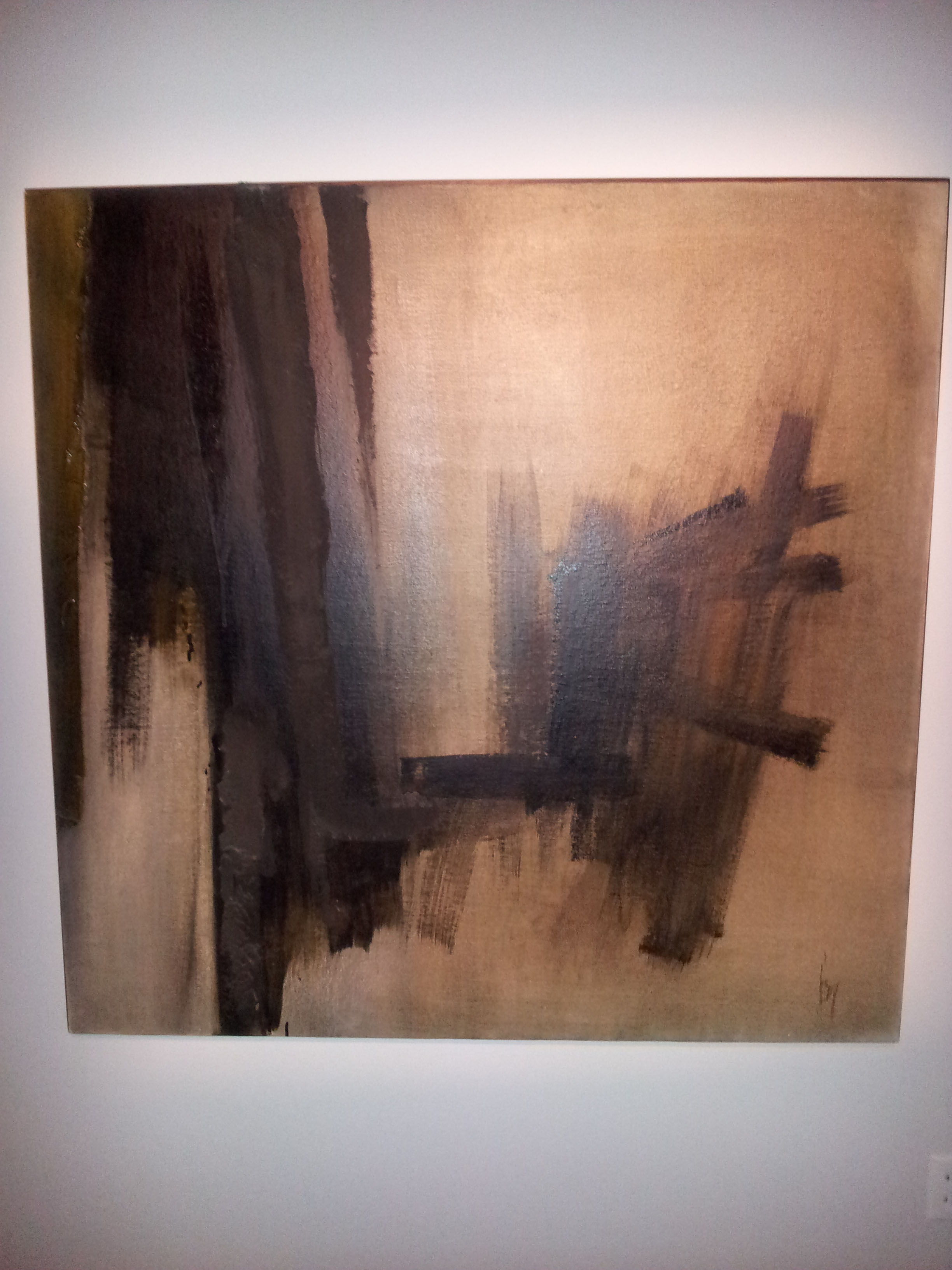 The title of this one is a bit of a pun. It may originally have been sold through That Gallery, which was connected to the Clotheshorse in Portland. Several large works seem to have been completed during this period circa 1964.  Those include “California Landscape”, “Edinburgh Tapestry”, “Harper’s Bizarre”, “Marin County” and the “Corner Painting”.  There is some speculation that they were all painted in Winnipeg, after Raymond fled the country.  However, the self portrait “Lincoln in Portland” is of the same era, and was definitely offered thought That Gallery.  The original image included a note to that effect attached to the upper right corner. 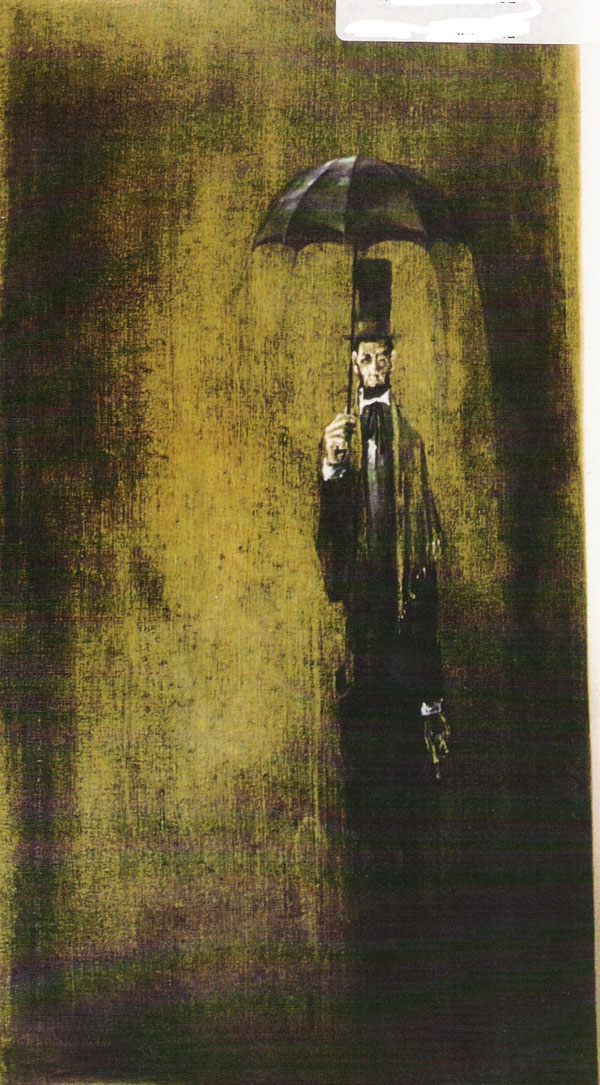 Probably “Lincoln in Portland” sold through That Gallery, a part of the Clothes Horse in Portland, Oregon.  Likely, it was painted around 1964. 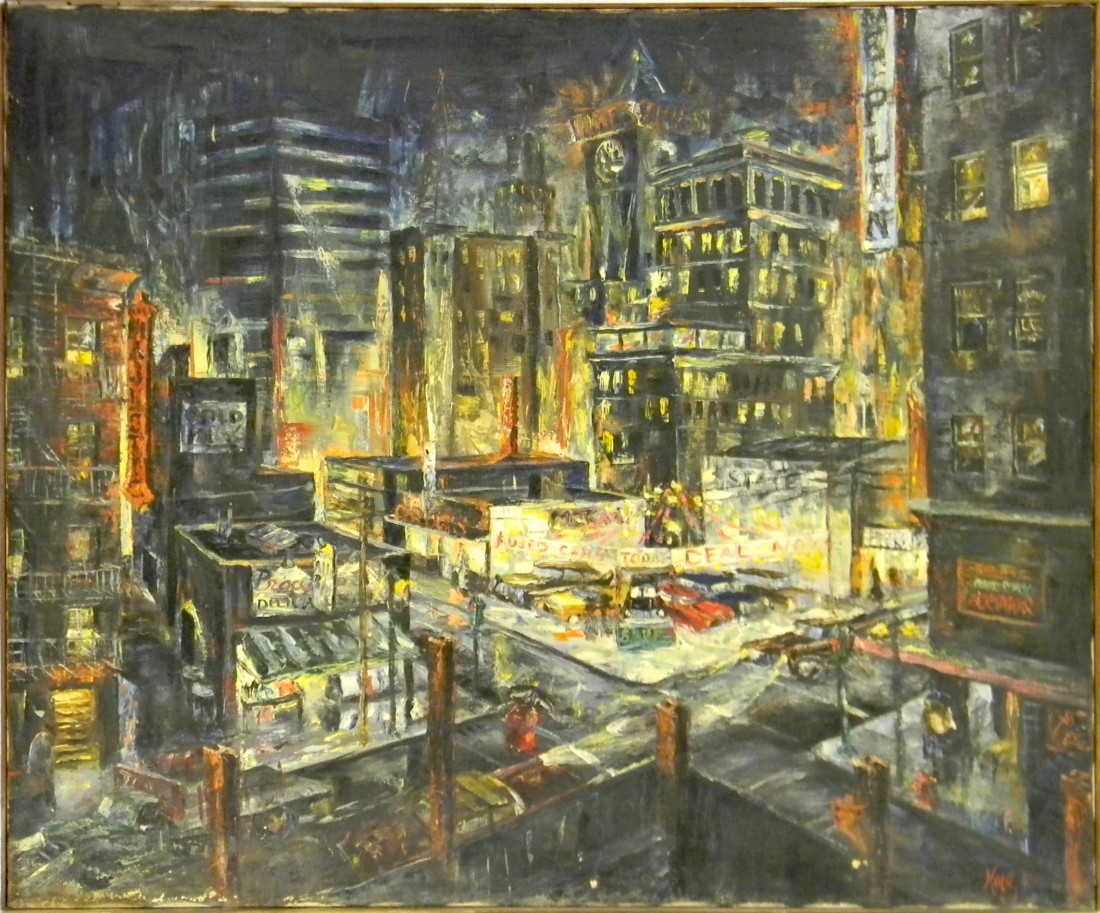 Majestic Hotel was just sold at auction in Pennsylvania.  The painting itself is signed “King 58”.  King’s full name is written out on the frame. 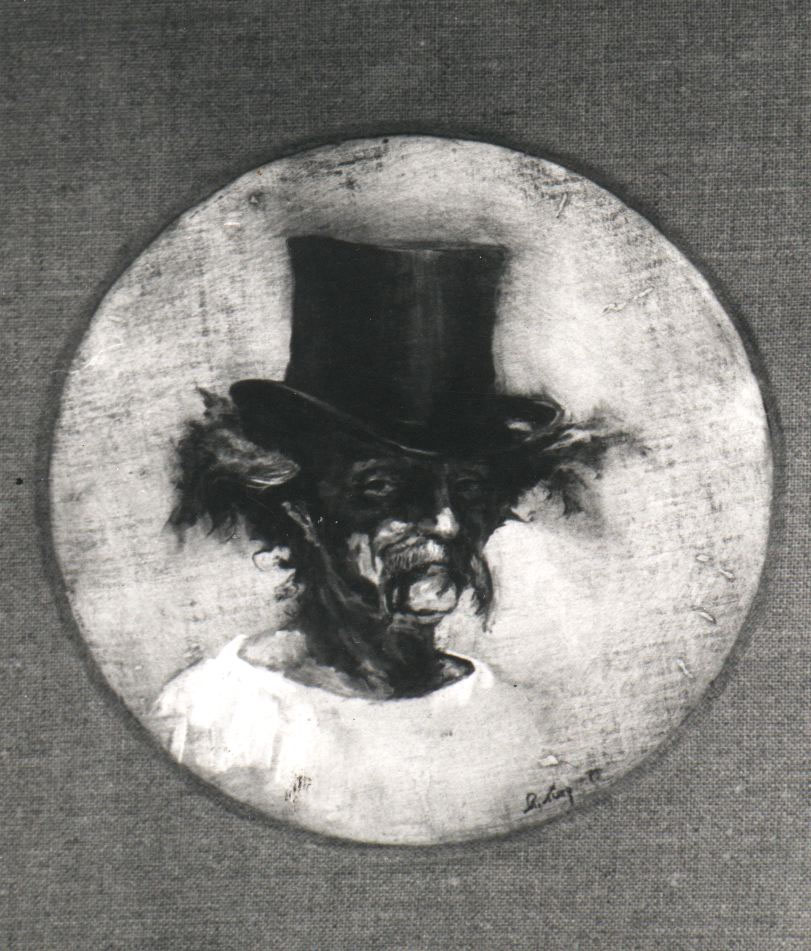 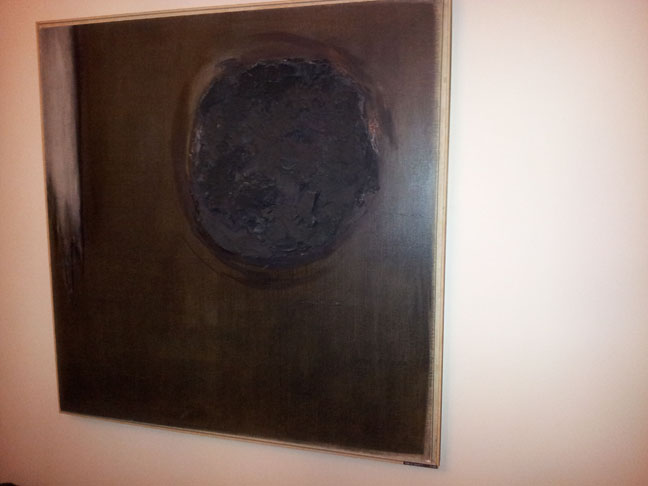 Probably from the That Gallery era, is the painting “Marin County”.  There is a theme here that can be found in another large painting done in 1964 and titled “Edinburgh Tapestry”.  The common element is a large, round and mostly obscure object floating in the landscape.  Edinburgh Tapestry is dated verso as being done in 1964.  Documents that came with the painting indicate that it was sold through That Gallery, a part of the Clothes Horse in Portland, Oregon. 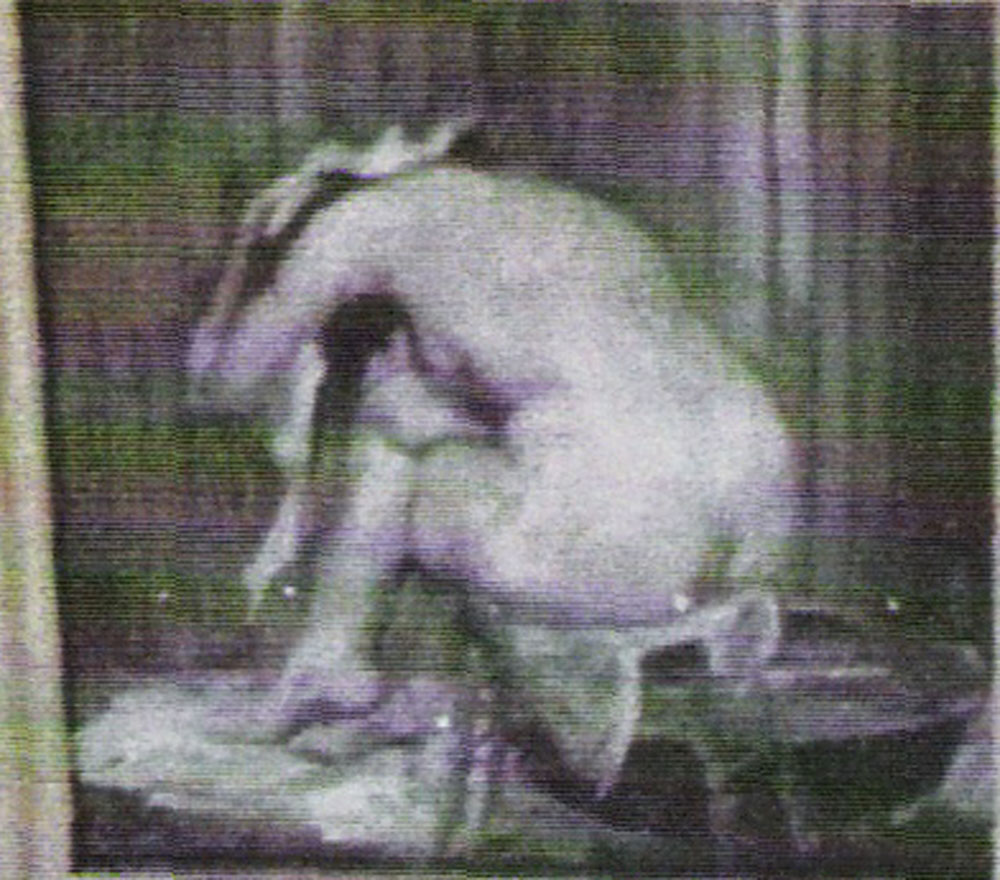 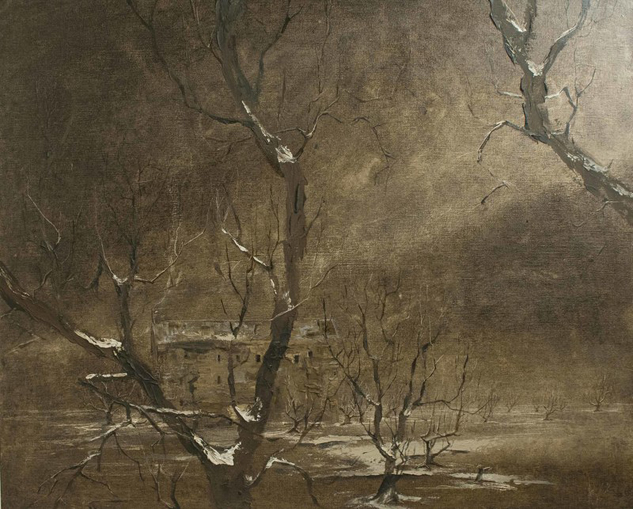 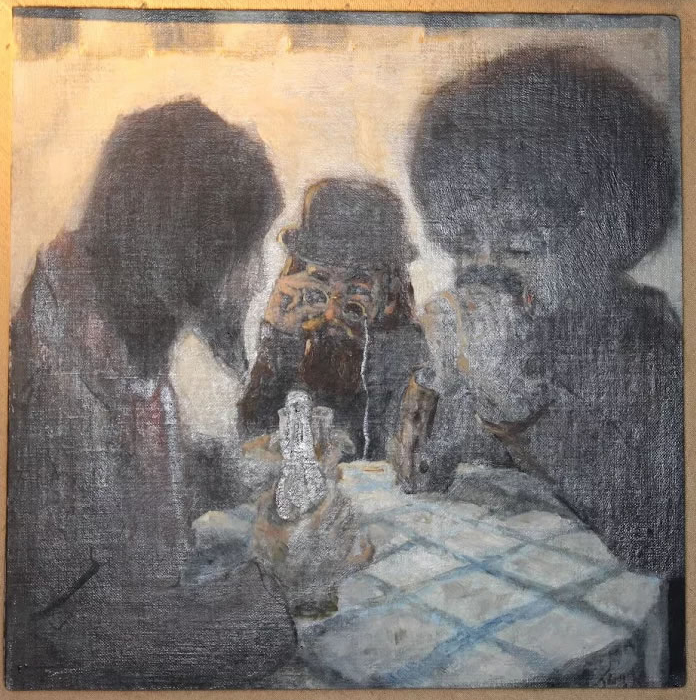 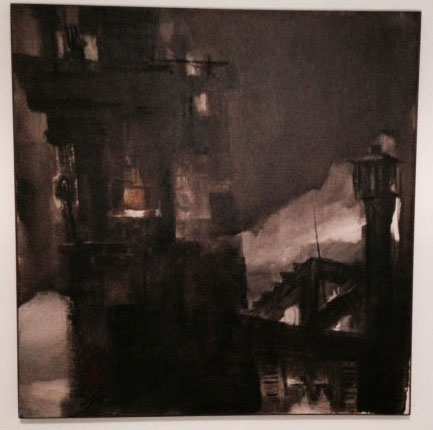 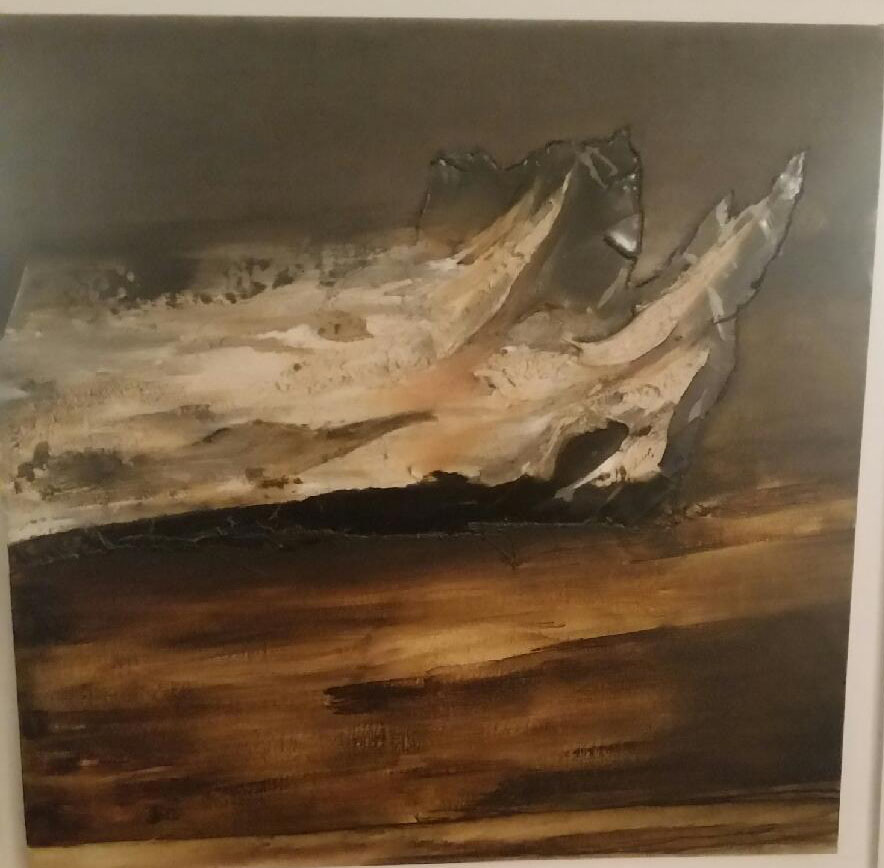 Nude Bathing on Roof (a triptych) 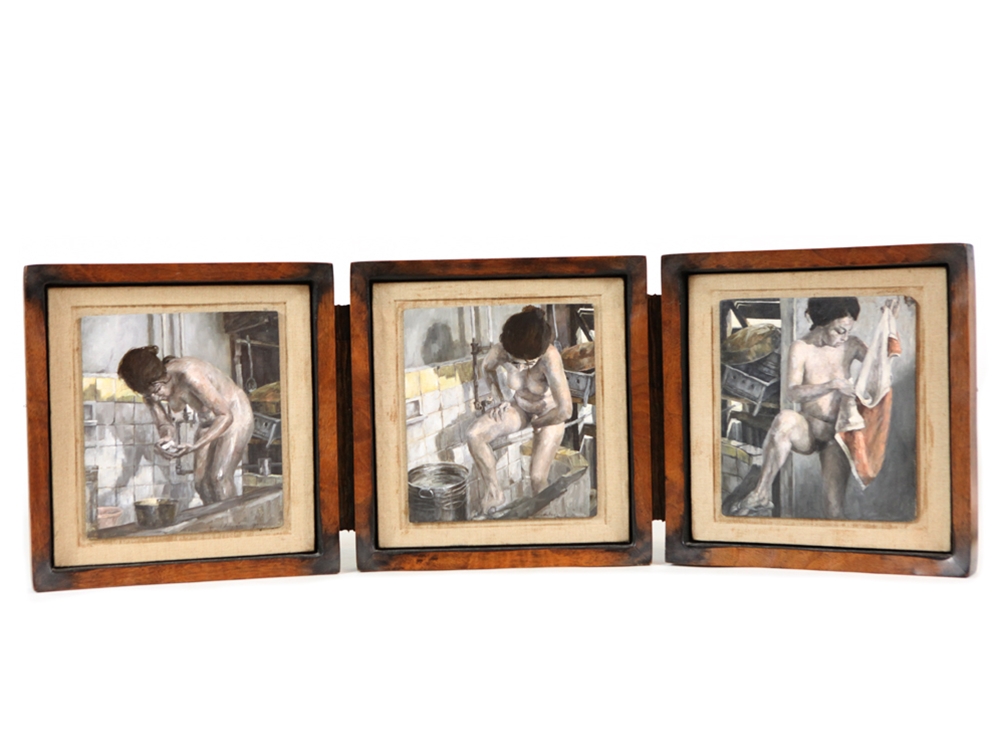 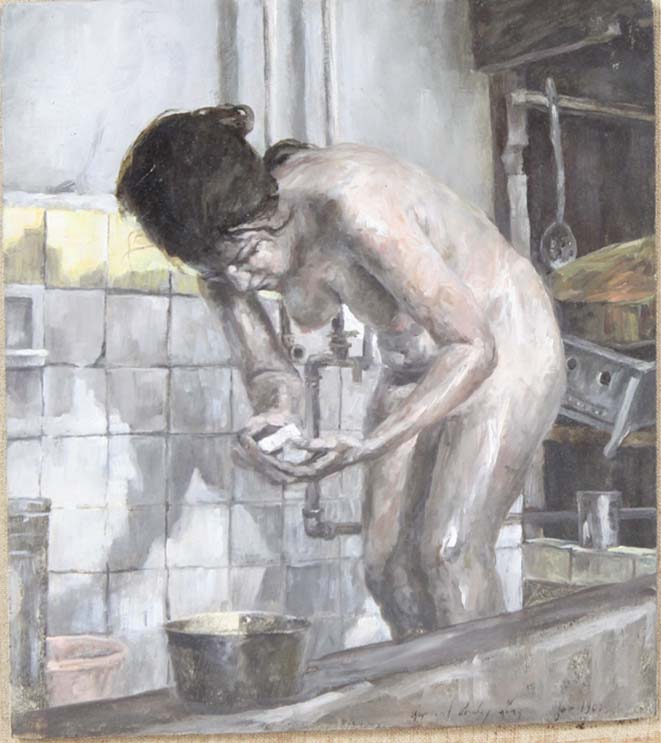 This work is a triptych, and a rather exquisite one at that. The dimensions of each panel are 7.5″ x 6.75″. They are oil on flat panel. These were painted in January of 1966 in Tel Aviv.  The painting above (left) gives us a feeling for the circumstances. The bathing area is small with tile placed vertically to protect the wall from water, yet it is really too small to be a bath tub. There is a light shadow cast against the wall. From the projected angle, the light source must be nearly horizontal.
From the title, we can infer that the light is coming indirectly from the sun. The portions of tile that are in the shadow are illuminated by the sky, thus the shadow is not too dark.  The subjects hands are busy working with the bar of soap. Irregular pipes run exposed along the wall. Nearby shelves are cluttered. 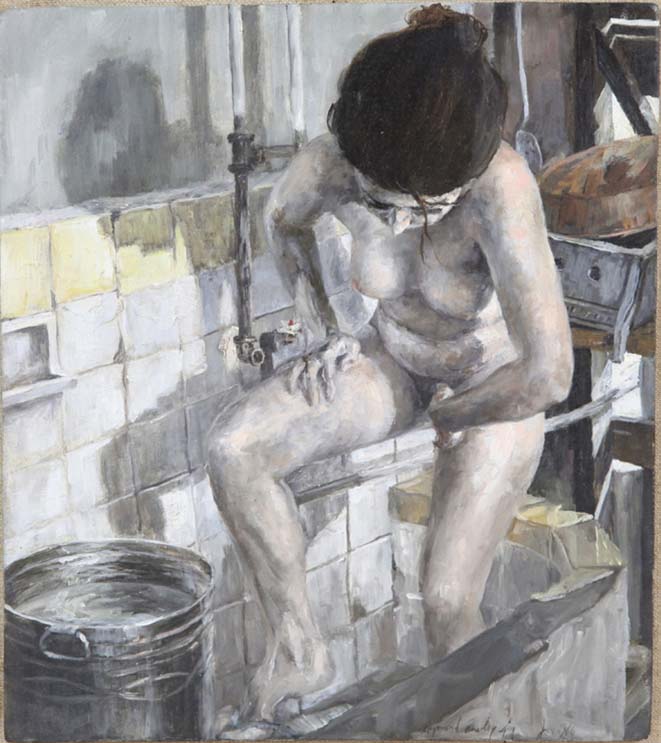 In the 2nd (middle) painting we see that there is a small canister of water resting in the bathing area.  The subject is attending to personal hygiene. She appears to be wearing a sandal. In a detail of the this, and the upper painting, we see what may be a slotted spoon. 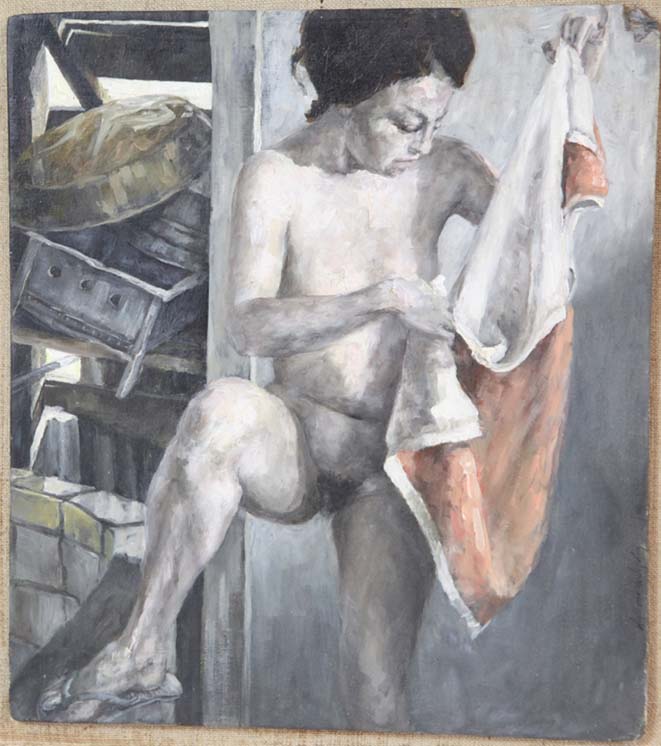 The 3rd painting of the triptych (right) shows her toweling off.  The sandal is more apparent. The clutter on the shelves seen are possibly equipment use in cooking.

The model who stood for these paintings may have been one named Contessa. This work is now in a private collection in Europe.  Price paid at auction was $750 plus gallery premium. 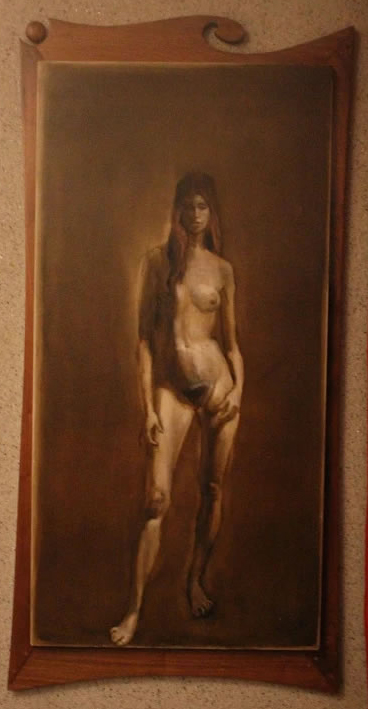 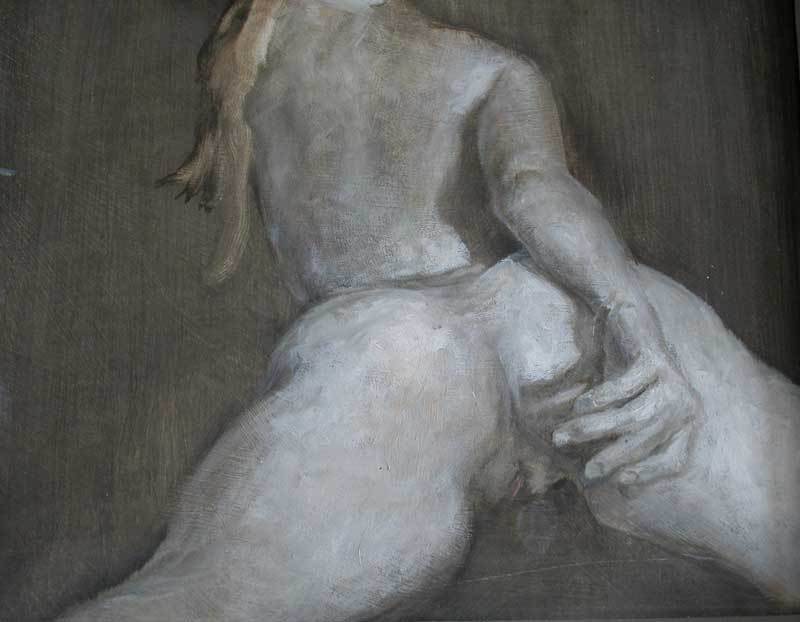 This oil painting measures 11.5 inches by 11.2 inches. It appears that the work is signed on the left side. The hardwood frame is something of a Raymond King signature in itself.

Nude on a Bed

It appears that she is drying herself with a towel.  There is strong sunlight that, at once creates a shadow on her body just above the hip, and floods the pattern in the towel so as to “bleach out” the checkered pattern that is evident on the towel in shadow.  At first I thought that it was some sort of garment such as a corset, but that explanation does not match the circumstances, i.e., she seems to be standing in some enclosure such as a shower stall.  As with most figure studies by King, the hands are doing somethin, not just posing. 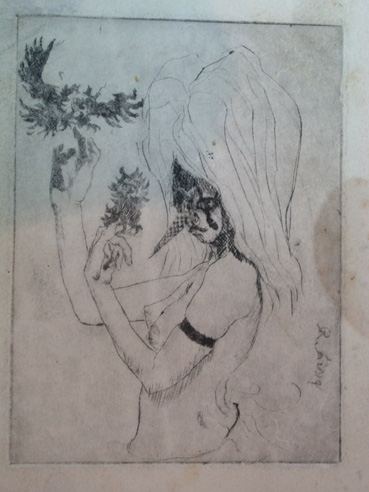 Three sketches from a private collection are described as etchings having dimensions of 5″ by 7″ and, are untitled.

The second piece is of a typical Dutch building of the kind found along canals in Amsterdam.  It is three stories tall plus a loft with a davot post for lifting materials up from the ground level.  I will call that “Dutch Building in Amsterdam”.

The third is a series of four sketches, one of the of someone riding on a sheep, the second of a woman from the shoulders up, a third of a nude woman from the back, and finally a image, at a 90 degree angle to the other three, of a man wearing a telpek (hat) of the kind worn by nomadic Turkmen.  I refer to this etching as “Four Sketches with Telpek, Sheep, Head and Nude”.