These pages attempt to catalog the oeuvre of the brilliant artist Raymond Rowley King, arranged in alphabetical order by title.  They are ranged over five pages to make them easier to load quickly.   On this page are items T through Z.   As additional works are submitted to me, I will attempt to add them.  A reasonably good image is required for publication.  If the collector wants to have the owner’s name mentioned, please include that information.  At present, I have images of just over 100 of the works of Raymond Rowley King.  Some times his name is spelled Raymond Rouley King incorrectly.  Whenever possible, i prefer to include the title of the work as well as the dimensions .. and whether or not the work is being offered for sale, and, if so, please suggest a  price.  In that regard, the location of the artwork is an important factor.  At present, emails may be sent to collectedartworks@hotmail.com . You may also call me at (916)383-5341.

The Barber and John 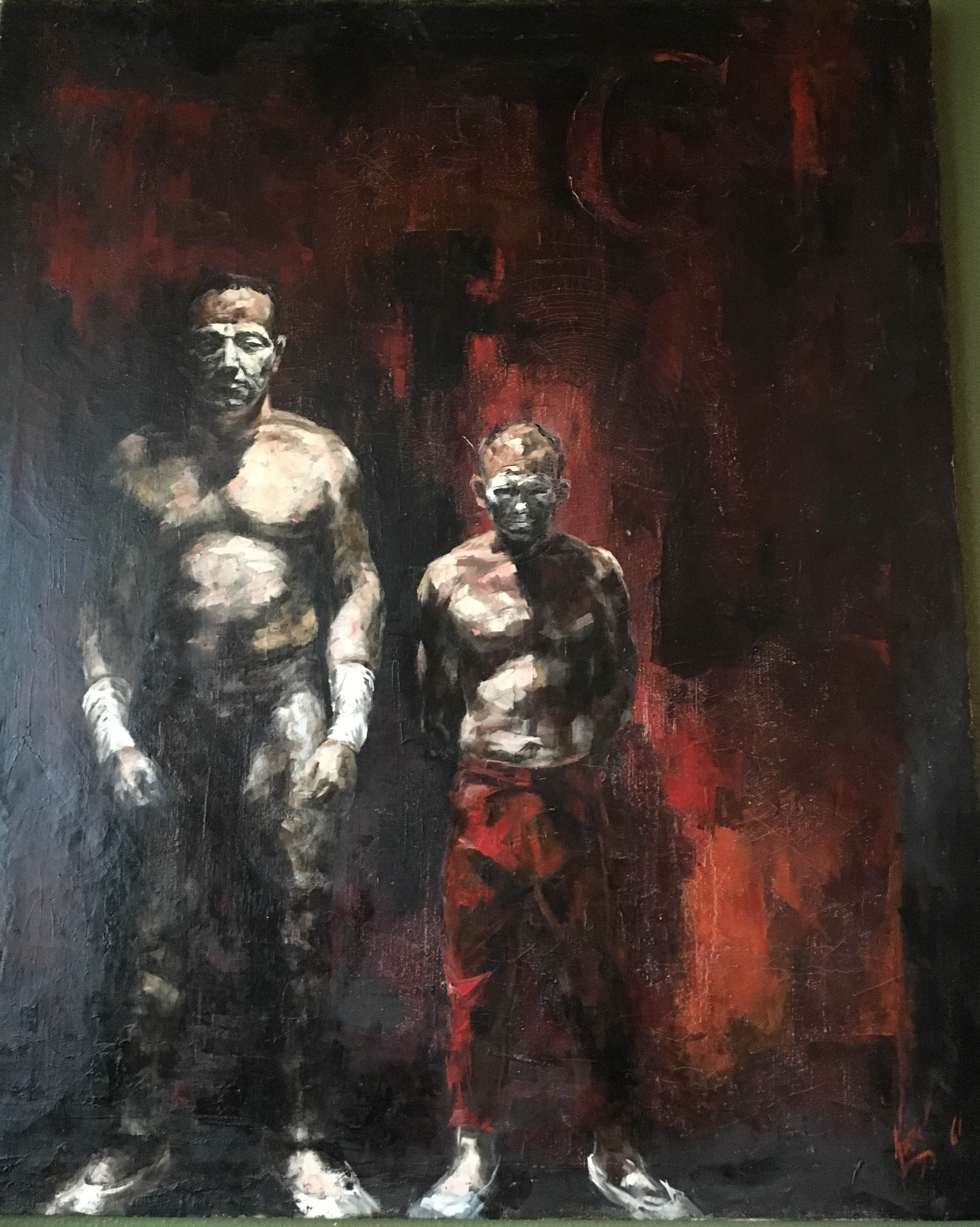 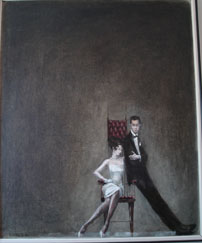 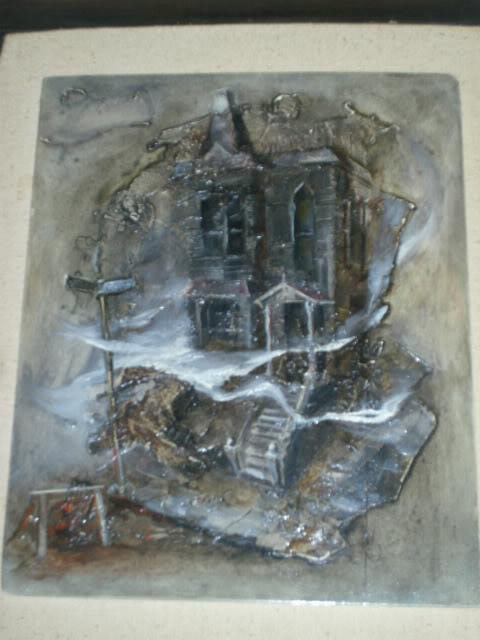 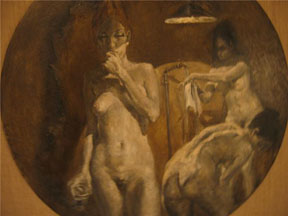 The Man From Leith 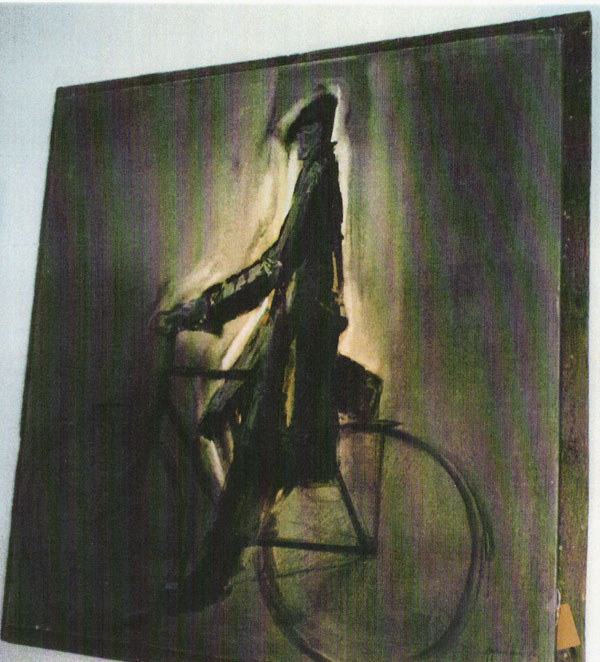 A newspaper article has emerged from the past.  I am putting it at the top of the page so that it will be easier to find.  It is repeated in the text about 2/3 of the way down the page.

At the Crestline Gallery a feature has been made of the paintings of Raymond Rowley King. a Californian now living in Edinburgh.These, with their constant palette of the darker earth colours thinly brushed (this painter, as a technician and draughtsman, is both assured and able), comes as something of a relief after so much conscious brilliance (referring to other artworks on show).

But one is troubled by the extreme polarity visible in King’s work.It is difficult to understand how the man who painted “Highland Tapestry” for example (a bold abstract with more or less landscape connections), or even “The Man from Leith” with its broad treatment of realism, could conceive the little composition “The Dance Studio” so niggled and so fussy. 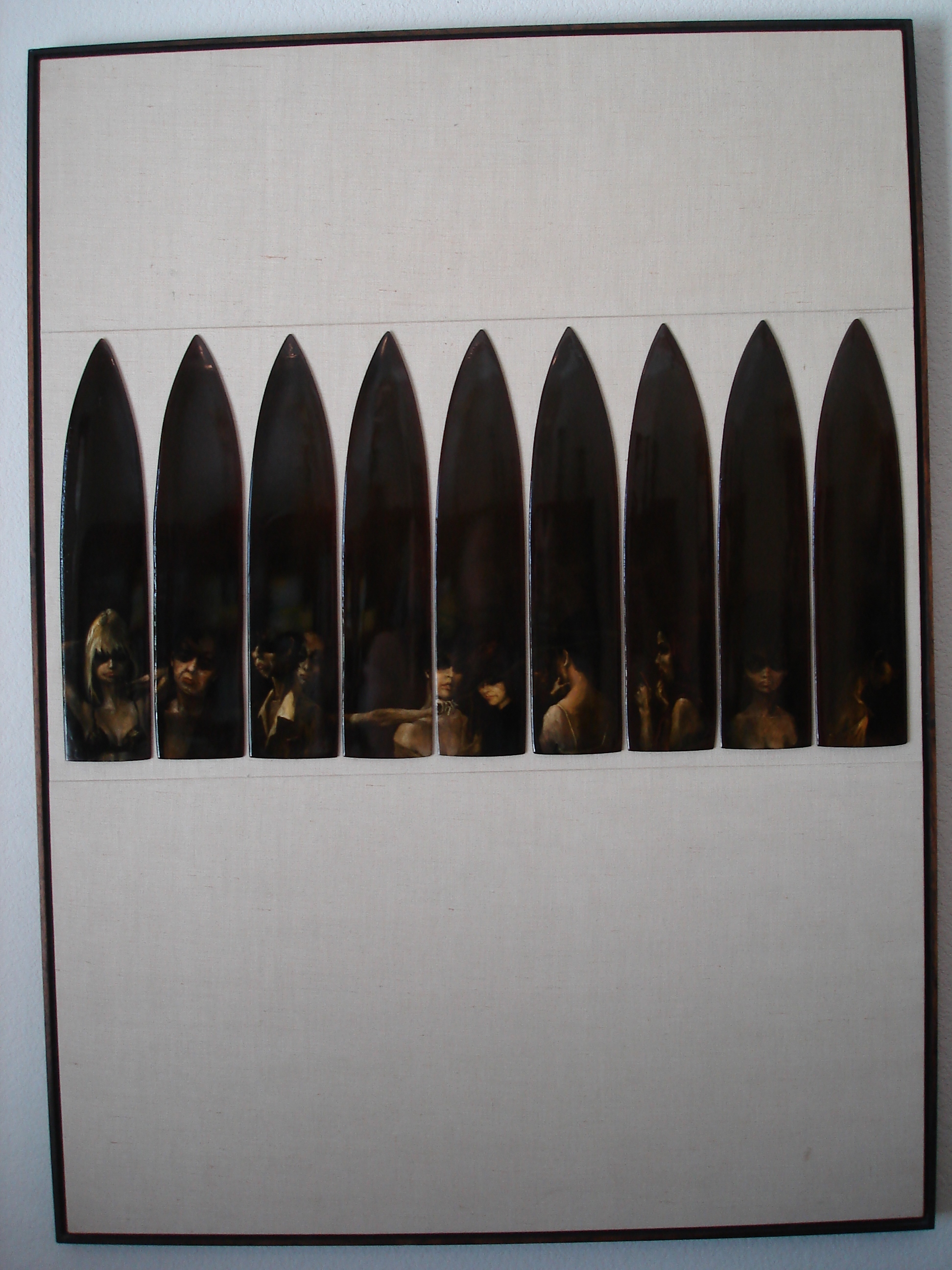 The Parlor House (left side) 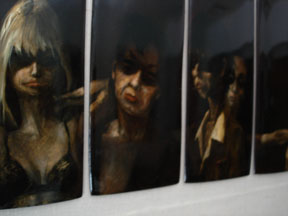 The Parlor House (right side) 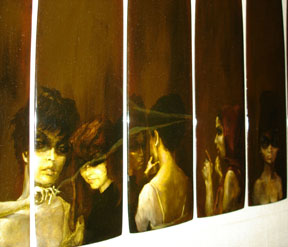 Not all of Raymond Rowley King’s works are immediately accessible to the viewer. One or two are downright disturbing. That was my feeling when I first came upon a photo of a piece called, ‘The Raven.’ The work appears to have been painted in 1963 or 1964 and purchased either at Vacaville or from a Bay area dealer who had obtained it at one of the ‘prison artists’ shows. 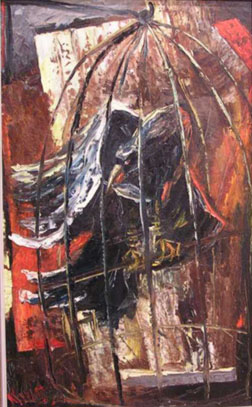 This seems a rather unhappy bird, as well it should being in a cage too small.  In that regard, it may be viewed as a self-portrait of the artist himself whose time spent in prison was surely time wasted although, on the other hand, he had never been so prolific, as an artist, prior to incarceration.  The bird appears to be cleaning a feather with its beak. 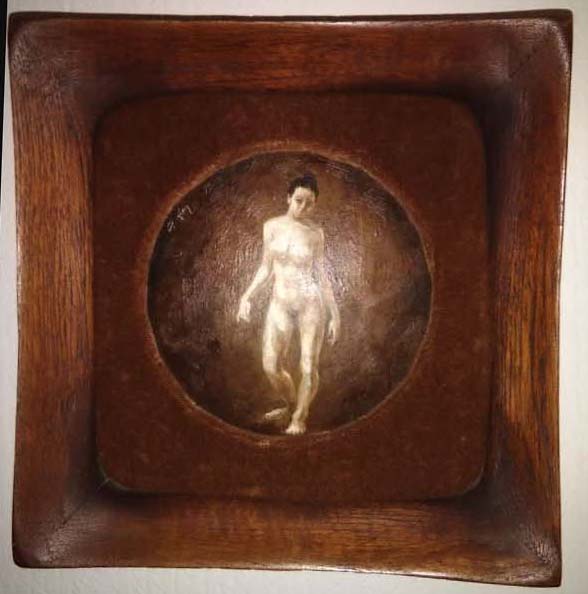 The Star of The Show 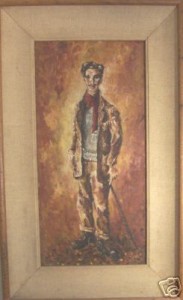 The Sweetest Thing in Town 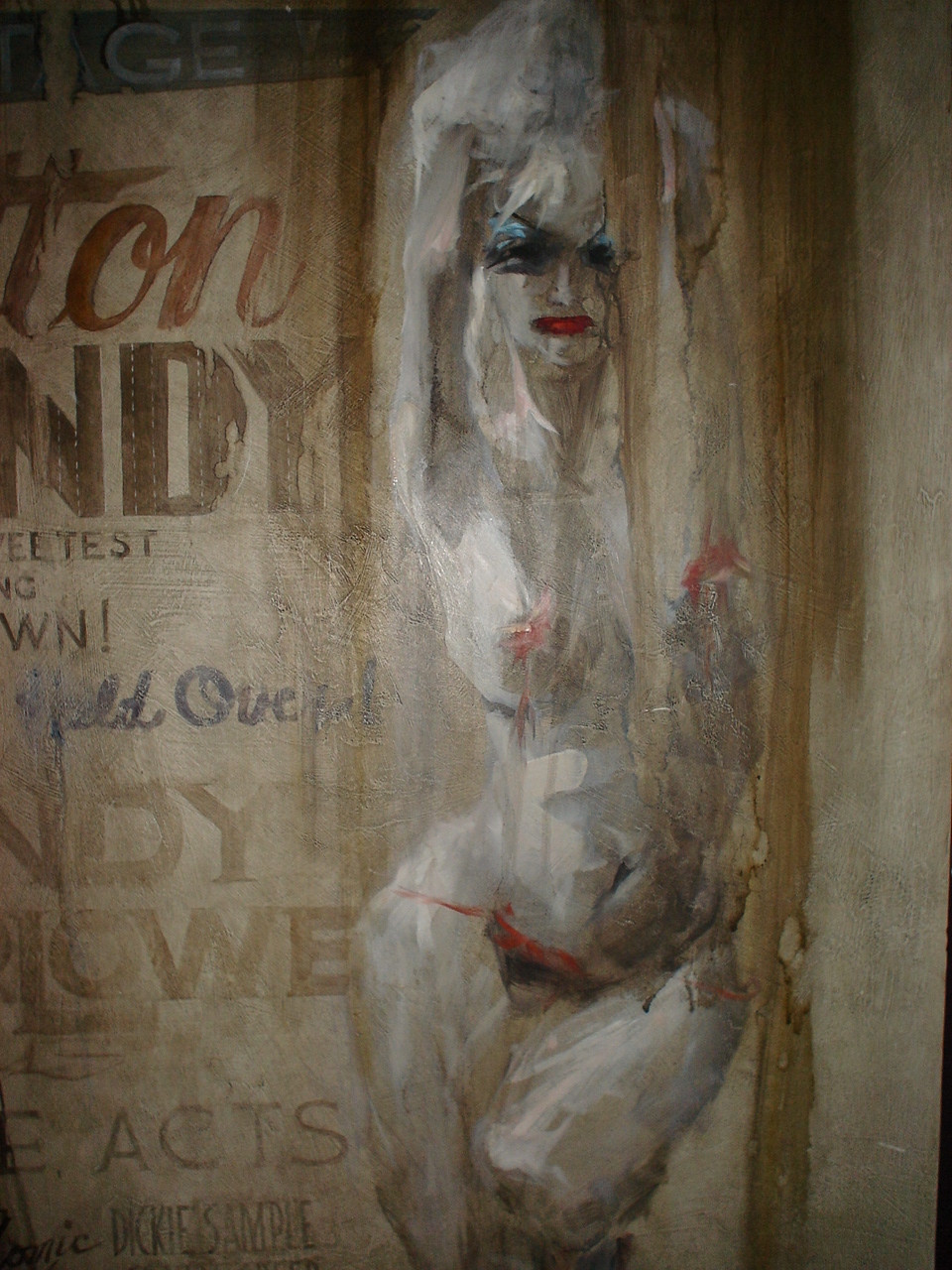 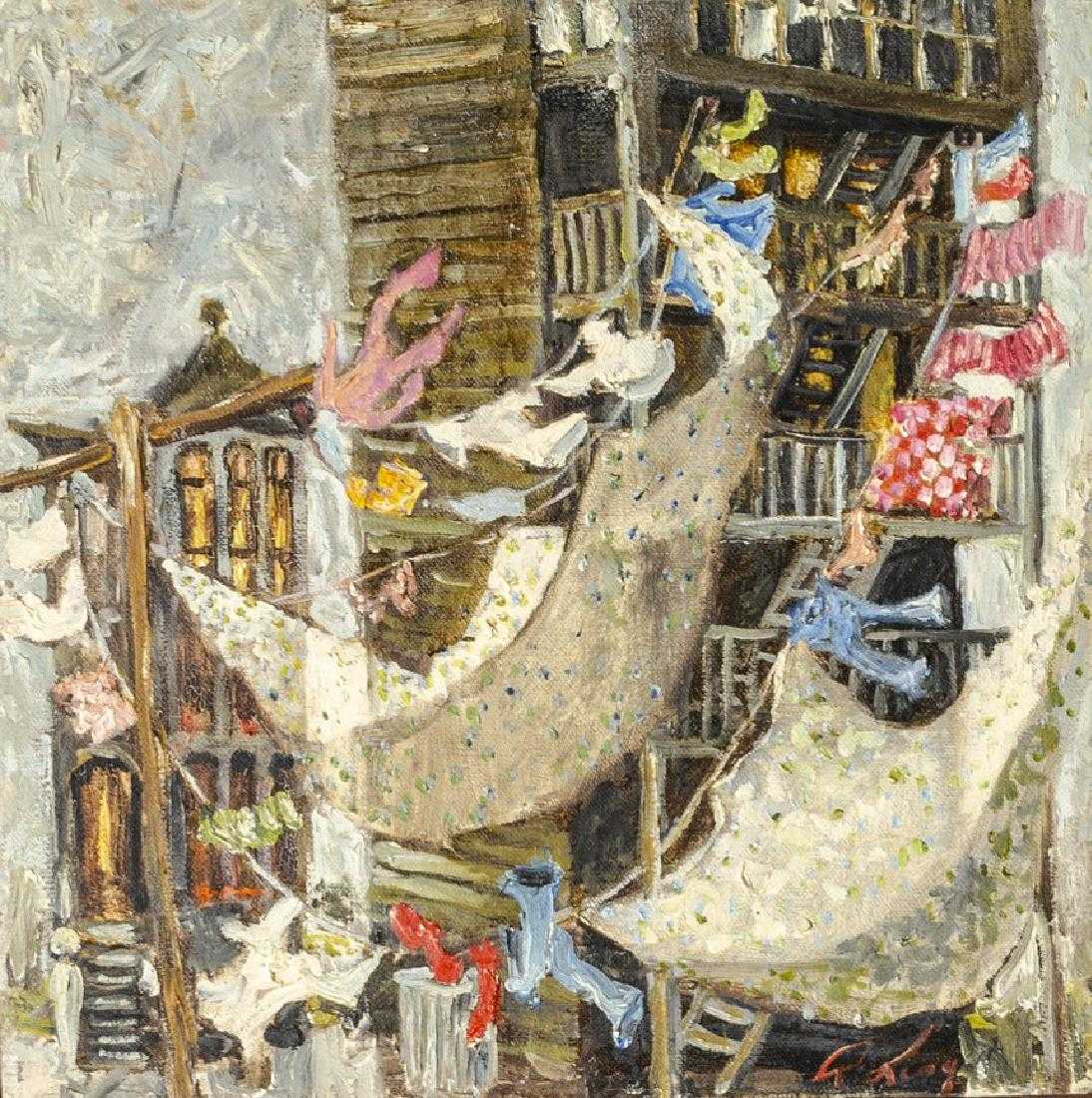 There Once Were Four Mades

This piece was painted in Tel Aviv in 1971.  I find it at once humorous and mysterious. The person who supplied the images to me thought that Ray had made an error in spelling. I would like for him to contact me again at collectedartworks_@_hotmail_._com so that I can ask for more details. In particular, I would like a close-up of what is on the platter. The may also be some interesting details outside through the window on the left.

There Once Were Four Mades (left side) 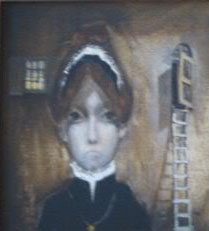 There Once Were Four Mades (middle) 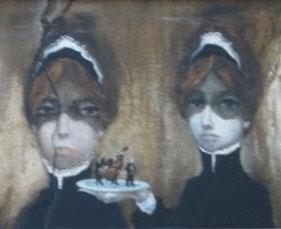 There Once Were Four Mades (right side) 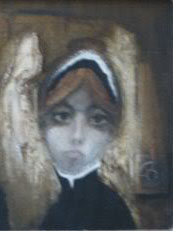 The work is in a private collection in Israel. 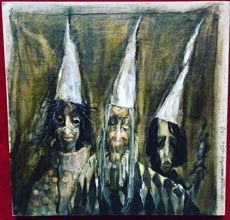 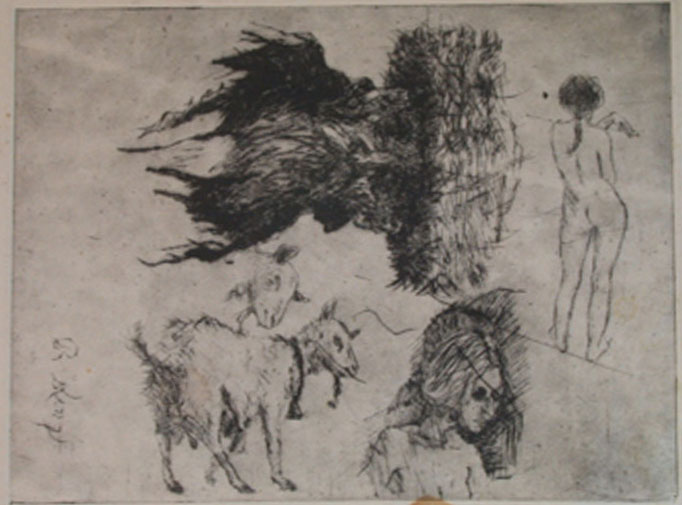 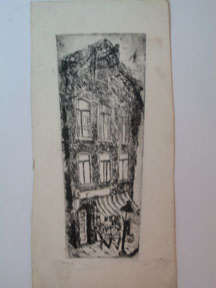 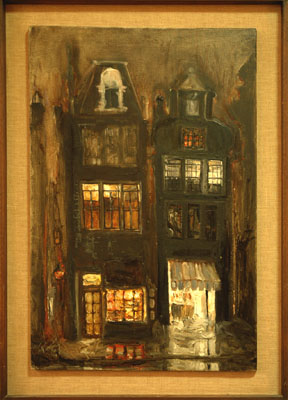 It is a rather cheerful piece for such a rainy day.  These are typical Dutch buildings of the kind found along canals in Amsterdam.

The painting measures 35 1/4″ in height and 25 1/2″ in width. Four paintings by Raymond Rowley King  were sold to the same people in Israel at roughly the same time seems to indicate that it too was painted in the mid 1970s and that all were painted in Israel.  The three other paintings were titled “Gillette”, “The Governess”, and “A Studio Corner”. 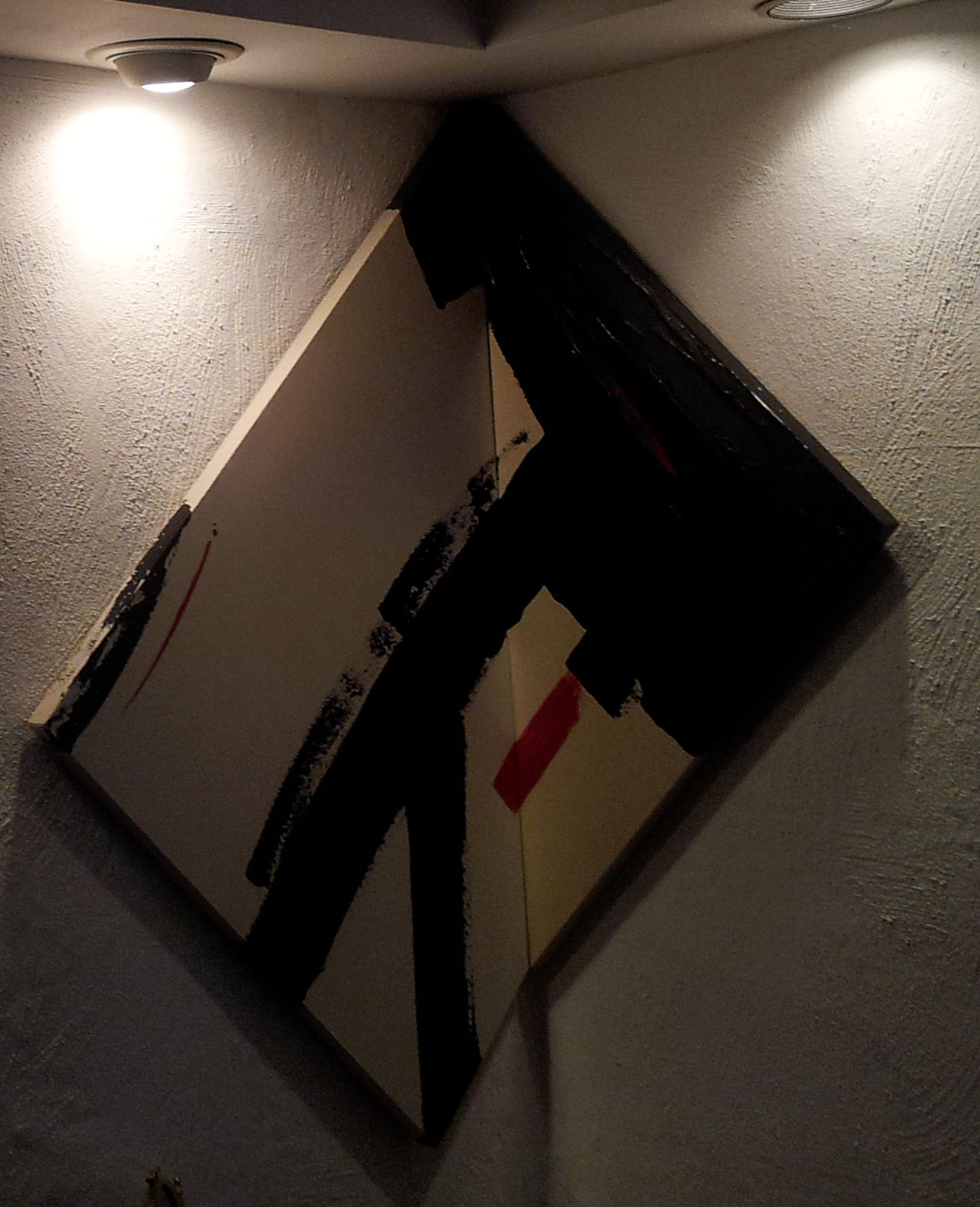 An unusual work is also a part of That Gallery era … it fits in to the corner of a room, and is untitled.  They may originally have been sold through That Gallery, which was connected to the Clotheshorse in Portland. 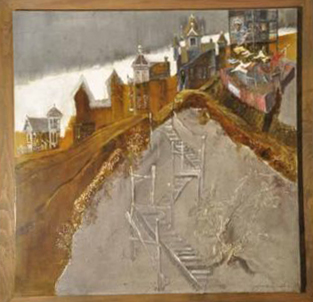 The title is just a guess. This painting is said to be a view of a city, presumably San Francisco, from a prison. That may be so, however, King was incarcerated at Vacaville Medical Facility in Vacaville, California prior to his flight to Israel. The only hill anywhere near that prison is Cement Hill in neighboring Fairfield. There are no Victorian houses on Cement Hill … only cows, and the remains of the once-thriving city called Cement. In its day, Cement had a complete cement manufacturing plant that was constructed down the side of Cement Hill so that, once the local supply of limestone and clay was brought to the top of the hill, the process of turning those minerals in to cement proceeded down the hill, with the final product loaded at the level of the delta. Cement was a complete city unto itself with a housing for the workers and their families, schools for their children, a hotel, a general store, a bar, and a whorehouse. If there were any Victorian era houses there, they were long ago torn down along with the rest of the plant after it closed in the late 1890s. The local supply of limestone had run out. The plant was briefly re-opened in the early years of the 20th Century using limestone trucked in from El Dorado county, but this proved to be too costly.

This particular painting measure a little over 42 inches square and was in Tel-Aviv several years ago, hence it was not likely to have been painted after his return to the United States and subsequent incarceration oat San Quentin. 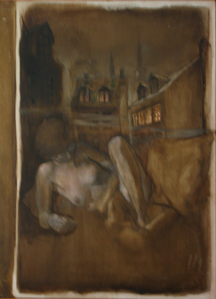 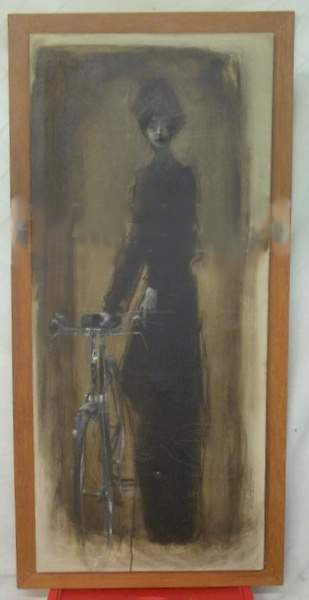 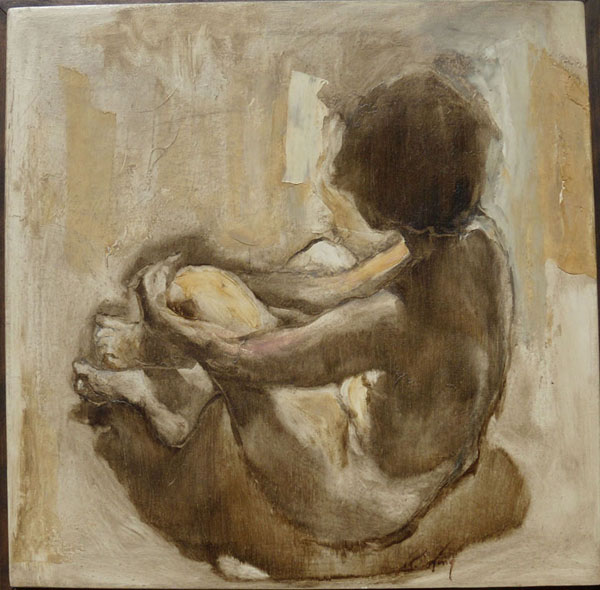